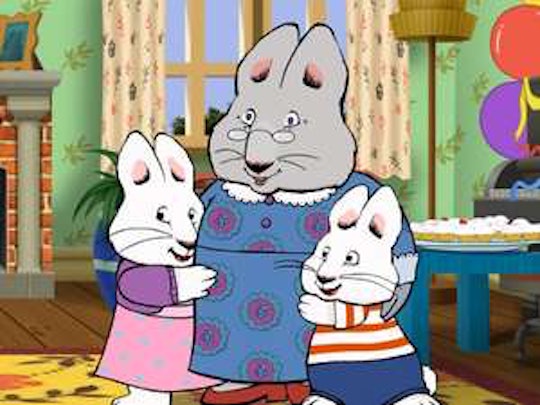 Kid Shows Only Ever Have One Adult Around, & Apparently There's A *Real* Reason Why

If you've ever wondered to yourself, "Where are Max and Ruby's parents?" you're not alone. It is something I have often wondered myself, watching the little bunnies live their lives with only the vague influence of a single grandmother. Once I noticed this phenomenon in Max and Ruby, I began seeing it all over the place. The Paw Patrol puppies are all children with maybe one adult to be found, and don't get me started on the show Some Assembly Required, and the terrible adults on that show. But what is the reason little kids' shows only have one adult featured in their plot lines? Did the grownups all die? Is it a child-led revolution? Or is there a method to this madness?

Even though I love to revel in a good television conspiracy theory as much as the next obsessive viewer, it turns out that there's a very simple reason why Max and Ruby's parents aren't involved in the show, and it has nothing to do with being eaten by wolves on an unfortunately chosen vacation to the woods. The creators of the show told Nick Jr., reported by Throwbacks, that "we don't see Max and Ruby's parents because I believe that kids resolve their issues and conflicts differently when they're on their own."

It makes sense. In the absence of parents, children are forced to resolve conflict through their own skills rather than having a parent settle their differences each in turn. It is a heuristic approach to children's "edutainment" that allows kids to be the star of the show. Not only that, but by permitting these children to have unsupervised play, they're given agency over their actions and learn valuable lessons about taking risks and the rewards that can have.

Using these shows as a guide, children are able to envision themselves in a world not dictated by the everyday mandates of the adults around them, but instead inhabit a world where they're free to be their truest selves.

On a show like Paw Patrol, which to many of us seems like the fever dream of an overly enabled adolescent in the form of Ryder, the children of the show — in the form of puppies — are able to be the heroes of their own story. Yes, by all rights Adventure Bay should have burned down at least 300 times by now (puppies with no opposable thumbs should not be such efficient first responders), but hear me out.

In the show, the puppies not only learn to work together to solve problems in new and unique ways, but they are also praised and lauded for taking on responsibility and solving problems through evaluating conflict with that risk and reward ratio. Children are not often the hero of their own story in real life by default. They need us to stand up for them and protect them from what would cause harm. Shows like this allow them to live vicariously through youthful heroes, teaching them valuable lessons about how it might look if they could take on the world, preparing them to eventually do that very thing.

Children learn differently than we do, and often it's through the vicarious nature of television that they are able to enact that part of their mind that allows them to face fear and excitement from a safe distance. Sure, we might look at the lack of supervision with a bewildered gaze, but rest assured, it has a purpose.