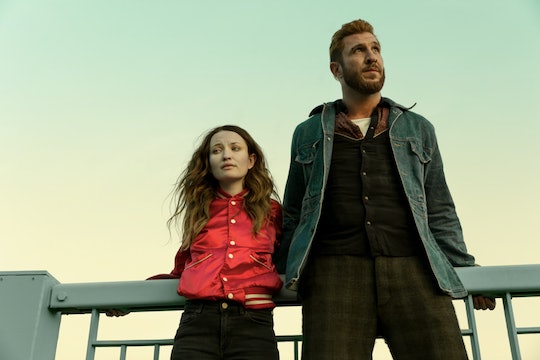 Laura Moon and Mad Sweeney have been an often-unwilling team since Season 1 of American Gods, but Season 2 finally saw them go their separate ways. Mr. Wednesday took Laura on a mission in Episode 3, while Mad Sweeney got to wander the roads on his own for once. They haven't been seen since, so where are Laura and Mad Sweeney on American Gods?

They were two of several characters completely absent from "The Greatest Story Ever Told," which makes knowing their location somewhat tricky. Laura spent "Muninn" accompanying Mr. Wednesday on a trip and then doing his dirty work for him by killing the many-eyed god Argus. Doing so gave her a recharge that turned back the clock on her decomposition, for the moment. But Wednesday was done with her after that. He left her in Argus' lair to find her own way out.

Meanwhile, Mad Sweeney was still trying to discover some way to bring Laura back to life for real. As the one who killed her (and then inadvertently revived her when his lucky coin landed in her grave), he's felt a certain kind of responsibility for her. On top of his raging and obvious crush, of course.

In "The Beguiling Man," Sweeney was set on taking Laura to New Orleans, where there is supposedly a "devil" in the French Quarter who could do something for her. In Mad Sweeney's words, there was "none better with the spice of life than the old Baron." It would cost a steep price, but this unknown devil could possibly enhance Laura's quality of life so she wouldn't have to worry about falling to pieces every five minutes like the end of Death Becomes Her.

Laura flaked on that to go off with Wednesday, so Sweeney undertook the journey on his own. After a series of humorous mishaps left him without a ride, he pretty much collapsed on the side of the road, exhausted. A kindly tour bus filled with Christian rockers picked him up with promises of going all the way to New Orleans. So unless Episode 5 says differently, viewers can only assume that Sweeney is taking that tour bus to Louisiana.

Laura is a much more uncertain variable. Assuming she found her way out of Argus' lair, there are two possibilities. She may have continued her search for Shadow, since keeping an eye on him has been her modus operandi since she crawled out of her grave. Now that she's been recomposed, there isn't as much pressure for her to seek out another shot at life. She could afford a detour to check on Shadow.

But if Laura is still set on being more than a walking corpse, she could decide to join Mad Sweeney instead. They might reunite in New Orleans so that they can find out if this old Baron can do what Easter could not. Until "The Ways of the Dead" airs next Sunday on Starz, their current whereabouts remain unrevealed. Still, I can't imagine it'll be long before these two are together onscreen again.