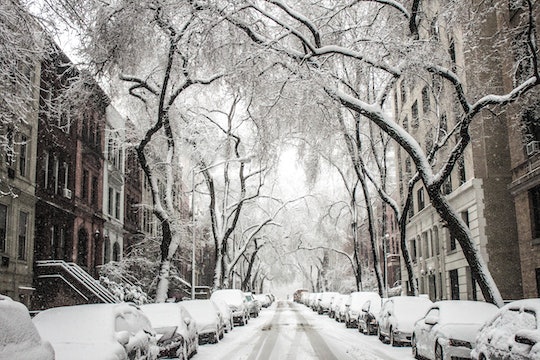 Where Are Schools Closed Because Of The Snowstorm?

As winter storm Niko makes its way toward the East Coast of the United States, many families are bracing for what could be the year's first significant blizzard. The first question on most kids' minds, however, is whether or not they're getting a snow day. Where are schools closed because of the snowstorm? The eastern seaboard is gearing up for a major weather event.

Beginning on Thursday, national weather forecasts are calling for 8 to 12 inches of snow in several east coast states. As of Thursday morning, snow flurries had already started throughout New York, New Jersey, and Connecticut. A winter storm warning and blizzard warnings are already in effect for these states, and New York City has closed all its publics schools, according to The New York Times. Throughout the rest of New York as well as neighboring New Jersey, many schools and colleges are closed as of Thursday morning. As the storm continues, it's likely that the closures will also continue to stack up. A full list of school closures in the Tri-State area is being updated by NBC New York.

The storm is expected to pick up speed throughout the day and into Friday, so here's a roundup of announced school closures for East Coast states affected by winter storm Niko as of Thursday morning:

The state of Connecticut has announced closures for over 1,200 schools as of Thursday morning, and NBC CT has a searchable database that's being updated in real time to include closures as well as delays.

The state of Delaware has issued school closures in several districts, according to the state's website. They include schools in the Appoquinimink and Red Clay consolidated school districts, as well as several charter schools.

The city of Philadelphia has closed all public schools ahead of the storm, and many other counties throughout the rest of the state of Pennsylvania has issued school closures for more than 800 schools for Thursday.

The city of Boston has closed all public schools ahead of winter storm Niko, which is expected to dump up to a foot of snow on the city. Schools are also closed throughout the state of Massachusetts in the following districts, according to The Boston Globe:

Higher up the coast snow hasn't started in earnest but New Hampshire has still issued school closures and delays in several districts, including cancelled classes at several of the state's college campuses. A full searchable list of New Hampshire school closures is available here, and most schools in the following districts have been closed:

As of Thursday morning, the state of Vermont has started issuing school closures and delays in the following districts:

At the top of the East Coast, the state of Maine has issued many closures, delays, and early dismissals for schools as they await the wrath of Winter Storm Niko. While northern counties are expected to be the hardest hit, school districts along the coast have also issued closures as of Thursday morning.

For a complete list of closures, including charter schools, visit the WCSH 6 Storm Center.

With many cities and states in the northeast expected to be hit with up to a foot of snow, winter storm Niko is sure to cause travel delays and snow days. If you can manage a long weekend tucked up safely inside, this would be the time to do it. But if you do have to leave your house, drive carefully and be sure to bundle up.

More Like This
Here's Where The 'Hocus Pocus' Characters Are 30 Years Later
Disney World Closes For 2 Days Due To Hurricane Ian
McDonald's Halloween Buckets Are Coming Back To The Delight Of Every '90s Kid
'Virgin River' Season 5 Is In The Works, So Here’s Everything We Know So Far