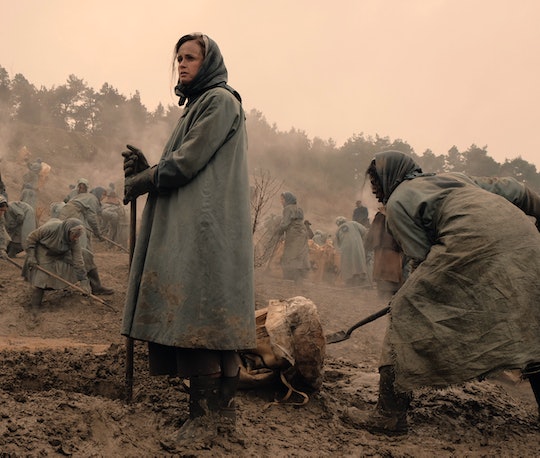 Fans Will Visit The Colonies On 'The Handmaid's Tale' Season 2 — But Where Is It Located?

In the Republic of Gilead, those who don't conform are punished. That punishment can be a cruel, public execution intended to set an example that keeps the other citizens in line. But it can also be mutilation or banishment to places called "the Colonies" where rejected residents of Gilead work until it quite literally kills them. But where are the Colones on The Handmaid's Tale? The first look at them in promotional material for Season 2 seems so far removed from the recognizable suburbs where the Waterfords live that it's hard to imagine it all takes place in the same country.

It's not clear exactly where the Colonies are located, though they are within the boundaries of the former United States. However, one can speculate a little based on the novel by Margaret Atwood that inspired the Hulu series. The Colonies don't seem to be one specific plot of land, but several spots that were affected by whatever nuclear event contributed to the decline of fertility and rise of Gilead. There appear to be Colonies in both the heartland and in the south, though once again the coordinates are vague. It's possible the show might shed more light on the locale, especially now that both Emily and Janine have been sent there.

The Colonies are uninhabitable areas where the banished are forced to clean up toxic waste while it slowly poisons them to death; the conditions are unimaginably harsh, which is why the Colonies are both a last resort and an effective threat. Once someone is sent there, they are stripped of their humanity in the eyes of the government and referred to as "Unpeople" because they no longer matter. Those who don't follow the rules or do as they're told can end up there but, as viewers saw with both former handmaids, it's after every other option has been exhausted.

There is also some indication in the novel that not every assignment to the Colonies involves cleaning up radioactive waste. Some people get arguably "better" situations where they are responsible for picking cotton or fruit. It seems like that is also true in the Hulu show, but from the looks of where Emily and Janine are in the Season 2 trailer, they got the worst of the worst.

In the first season, the Colonies were described as a place where "your skin will peel off in sheets, and then you'll die" but the second season will delve into the reality behind the ominous threat. Showrunner Bruce Miller provided Harper's Bazaar with a more thorough explanation, saying that the imagined possibilities might be scarier but that doesn't mean the real place isn't horrifying in its own way. It's not just "sadism for its own sake," but a realistic extrapolation of what might arise when a society doesn't care about the safety of its workers, or their lives. Miller said:

There are tons of different kinds of colonies: some where they do agricultural work, some where they're cleaning up toxic waste, some where they're building farm houses. The women who are sent to the colonies are called un-women, so they're not even people, they're not citizens, they're just free labor. The people doing this to these women need a way to justify it, so there has to be a reason that not just one person would believe, but a whole bunch of people would believe. The Colonies can't be pointless — they have to have a goal for Gilead.

It seems as though Hulu's adaptation of The Handmaid's Tale will explore the Colonies more deeply than the book did, perhaps revealing exactly where they're located in the process. Viewers will definitely have a fuller understanding of Gilead once Season 2 premieres on April 25.