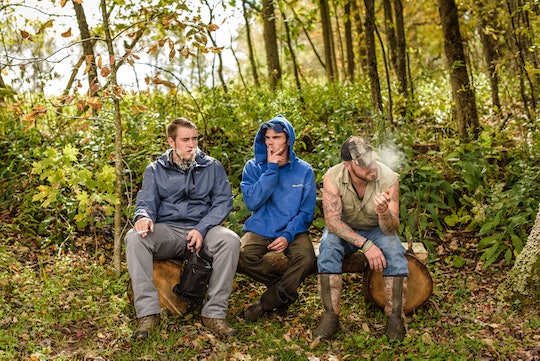 The 'Recovery Boys' Continue On Their Road To Recovery Following Documentary

Netflix's most recent documentary, Recovery Boys, follows four men as they attempt to reinvent their lives and mend broken relationships after years of drug abuse. The documentary shows the men's time together in a farming-based rehab and then their experience once they leave. After seeing the documentary it's not surprising that many people are wondering where are the Recovery Boys now?

First, if you haven't watched the documentary yet you may be wondering who the recovery boys are. There's Jeff, who's 25 in the documentary, and is worried about the wellbeing of his two young daughters. Rush, 26, contends with depression. Ryan, 35, sings and plays guitar. And then there's Adam, who's been homeless and has relapsed before. He's the youngest at only 23.

Through the documentary, viewers watched as the four men went through rehabilitation at the nontraditional clinic, Jacob's Ladder, which is on a farm in rural West Virginia. Along with attending group therapy sessions and doing ranch work, they also participated in holistic treatment activities like yoga, meditation, and art projects. While all the men made a lot of progress while in rehab, the hardest part for addicts is always going home and facing the bad influences in the outside world again. Thankfully, it looks like all the men are doing well.

"My hope for this documentary is that it de-stigmatized the addict," he said. "Everybody thinks of the guy under the bridge with the tattoos, the beard. We're not just all bad people. We are good people inside." The documentary has definitely opened many viewers eyes to the real affects of opioid addiction, in a humanizing that many haven't seen before.

As for Jeff and Adam, there doesn't appear to be much information about how they're doing after the documentary's end, but hopefully they're doing well too, especially Jeff. During the documentary, Jeff learned that his three-year-old daughter was molested while in foster care, one of the many reasons why Jeff sought help for his addiction.

Filmmaker Elain McMillion Sheldon is the visionary behind the moving documentary. Living in West Virginia herself, Sheldon had a close connection to this story as she saw first hand what the opioid epidemic was doing in her state. Sheldon told The New York Times that she'd become frustrated with the "othering" that happened to the addicts in her state and wanted to create a more nuanced portrayal of West Virginia's opioid struggle.

First, she made Heroin(e), a short documentary that tracked caretakers and emergency medical workers combating the epidemic. The film got an Academy Award nomination. Now, with Recovery Boys, Sheldon took a closer look at the lives of people in recovery. "When we embarked on this, it really was trying to find something that gave me home," Sheldon said to The New York Times. "I wanted to find people who were actively trying to do something about the situation."

Sheldon did an excellent job, showing the ups and downs of the recovery process that felt real. It was easy to feel empathy for these men who were fighting various battles that stemmed from their addiction. Hopefully, Recovery Boys will lead many to be more empathetic and continue to spark conversations about what can be done for those struggling from these addictions.

More Like This
14 More Amazing Shows Like Workin' Moms To Watch That Also Get Real About Motherhood
Yellowstone Season 5 Will Have More Episodes Than You Were Expecting
A Breakdown Of Who’s Who From The Dutton Family On 'Yellowstone'
Our Fav Funny Couple Melissa McCarthy & Ben Falcone Created A Weird, New Comedy Series