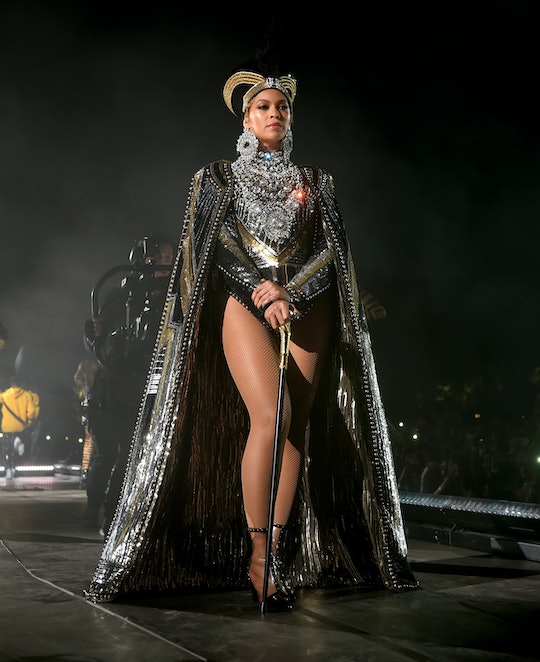 Here's How To Get Your Hands On Beyonce's New Surprise Album

For Beyoncé fans, this week is turning out to be a huge treat. Along with releasing her new Netflix documentary, Homecoming, the iconic singer dropped an accompanying surprise album that has the Beyhive buzzing with joy. Like millions of fans around the world, you’re probably anxious to get your hands on the Queen’s latest musical venture, so here’s a heads up on where you can buy Beyoncé’s Homecoming album.

All of Beyoncé’s music is available on hubby Jay-Z’s streaming music platform Tidal, but you can also buy Homecoming: The Live Album on Spotify, Apple Music, Amazon Music, iTunes, and Google Play. The album features 40 live tracks from both weekends of the singer’s landmark 2018 Coachella performances, as well as a special version of “Lift Every Voice and Sing” sung by her daughter, Blue Ivy. On the track, you can hear Blue Ivy belt out the beautiful song, after which Bey proudly says “Beautiful job, you sound so pretty,” to which Blue Ivy adorably responds, “I want to do it again…It feels good.”

The Homecoming: The Live Album features all of the songs from Bey’s Coachella sets, including her on-stage collaborations with J Balvin and her former Destiny’s Child bandmates Michelle Williams and Kelly Rowland. The most electric collaboration of the album is her live rendition of “Deja Vu,” which she performed alongside Jay-Z. You’ll find popular songs from Bey’s own albums — including her live Coachella versions of “Single Ladies,” “Run The World,” and “Baby Boy” — as well as her covers of "Before I Let Go" and “Lift Every Voice and Sing.”

It’s no surprise that “Lift Every Voice and Sing” is on the album twice — one Beyoncé version and one Blue Ivy version — because in an interview with Vogue, the singer revealed that the song — sometimes referred to as the “black national anthem” — inspired her vision for Coachella.

“I had a clear vision for Coachella, I was so specific because I’d seen it, I’d heard it, and it was already written inside of me,” she said. “One day I was randomly singing the black national anthem to Rumi while putting her to sleep — In the show at the time I was working on a version of the anthem with these dark minor chords and stomps and belts and screams. After a few days of humming the anthem, I realized I had the melody wrong, I was singing the wrong anthem. One of the most rewarding parts of the show was making that change.”

She added that when performing the song at Coachella, she “felt pure joy shining down” and could feel how much it moved everyone listening. “I know that most of the young people on the stage and in the audience did not know the history of the black national anthem before Coachella,” the singer told Vogue. “But they understood the feeling it gave them. It was a celebration of all the people who sacrificed more than we could ever imagine, who moved the world forward so that it could welcome a woman of color to headline such a festival.”

As a headliner at Coachella, Beyoncé made history in more ways than one. Not only was she the first African-American female to lead the event, her iconic performance became a permanent fixture in pop culture. Luckily, fans now have a visual documentary of the event to watch, as well as an album that they can jam to all summer.