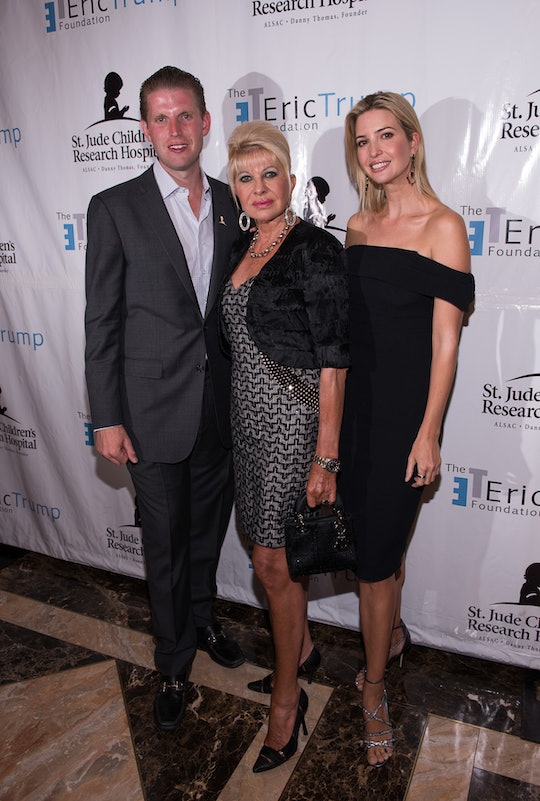 Ivana Trump's Memoir Is All About Her Kids

President Donald Trump's children are his pride and joy. Trump has repeatedly expressed his enthusiasm for his kids, and in return, they've helped him build what amounts to an empire in the business world. But Trump isn't the only important parental figure in his kids' lives; Ivana Trump, who gave birth to Trump's three oldest children — Donald Jr., Ivanka, and Eric — is the woman who raised those same kids now at the helm of Trump's organization. And on Wednesday, it was announced that the mother of three would be penning a memoir all about that experience and what it was like to raise three successful, ambitious children. So where can you buy Ivana Trump's memoir when it comes out?

As Trump's first wife and mother to three movers and shakers, Ivana knows a thing or two about keeping a busy family life running smoothly, and her new memoir, titled Raising Trump, which will detail her story of "motherhood, strength, and resilience," according to The Washington Post. The novel also will also detail her own childhood, her relocation to New York City, and her romance with Trump, long before he became the 45th president of the United States.

Unfortunately, Ivana's memoir is not out in stores yet and won't be for some time. Those looking for the inside scoop on how the Trump children were raised (or what it was like to be married to Donald Trump) will have to wait until September 2017 to get their hands on the memoir in stores or online at retailers where books are sold, according to The Cut.

According to The Washington Post, the book might reveal interesting details about the Trump's childhood based on the book's synopsis from a statement from her publisher, Gallery Books:

As her husband takes his place as the 45th president of the United States, his children have also been thrust into the media spotlight — but it is Ivana who raised them and proudly instilled in them what she believes to be the most important life lessons: loyalty, honesty, integrity and drive.

It sounds like Ivana's memoir will surely be memorable — especially if it is all about raising her children, who are successful in their own right. Ivana might have a lot of interesting things to say about parenting that will be worth reading too: In October, Ivana reportedly told guests at a benefit in New York City that she had "brought up the children single-handedly," without the help of Trump, according to Us Weekly. But while Ivana was married to the new president for 15 years, according to Politico, politics will not be one of the main focuses in the new memoir, as Gallery Books has described Ivana's new memoir as "nonpolitical."

In a statement to Time, Ivana gave a few more details about her book and her parenting outlook. "I was a tough and loving mother who taught them the value of a dollar, not to lie, cheat or steal, respect for others, and other life lessons that I'll share now in Raising Trump..." Ivana said.

Every mother deserves the chance to tell her own, unique story. Ivana's memoir, out in September, will provide a behind the scenes look at the Trump children from the woman who knows them best.