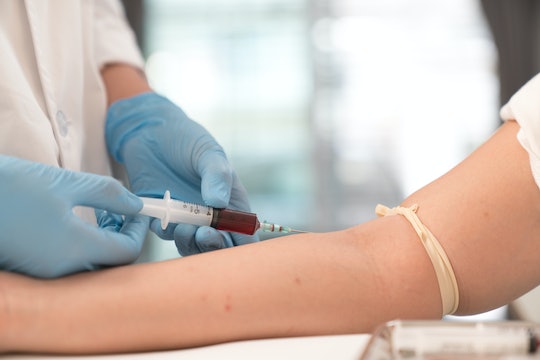 Where Can You Get A Blood Pregnancy Test? You Have Options

Full disclosure: I've never been pregnant. One time I took a pregnancy test when my period was a day late, only to have it show up an hour later. But as a woman trying to conceive, I've often wondered what I would do if I just "knew" I was pregnant. And I've spent many nights wondering how on earth you can trust a take-home pregnancy test. So if I found out I was pregnant, you can bet I'd be asking where can you get a blood pregnancy test so I could get some definitive confirmation, and as soon as humanly possible.

Turns out, according to parents, you can get a blood pregnancy test at your doctor's office and at select labs. Most women's health clinics, like Planned Parenthood, for example, typically only offer urine pregnancy tests except in special circumstances. In other words, just because a health clinic or local Planned Parenthood can confirm a pregnancy, doesn't mean they'll do so via a blood test. It's best to research your options and what's provided to you at each clinic and/or doctor's office, prior to making an appointment.

So, what's the difference between a urine pregnancy test and a blood pregnancy test? In a word, hCG. According to the American Pregnancy Association (APA) the human growth hormone, or hCG, is the pregnancy hormone. The APA goes on to explain, reportingL "This hormone is produced by the placenta shortly after the embryo attaches to the uterine lining and builds up rapidly in your body in the first few days of pregnancy."

"Although a home pregnancy test can usually pick up a concentration of about 50 units of hCG (the pregnancy hormone human chorionic gonadotropin), a pregnancy blood test can detect as little as 5 units of hCG."

I know I joked about wanting a blood test to confirm, but it's not usually necessary to go that route. Parents even reassures us trying to conceive women that, "early pregnancy tests aren't usually necessary, but they can make a difference for women at higher risk for miscarriage or ectopic pregnancy." If you are at risk for either of those things, you'll want to know you're pregnant at the earliest possible time so that you can head to your doctor for the most suitable treatment for whatever condition you have.

What are you in for with a pregnancy blood test? Well, actually two blood tests about 48 hours apart, according to Parents. "Early in pregnancy, your hCG levels should double approximately every 48 hours. By seeing the change in hCG levels, the doctor can evaluate for a miscarriage or ectopic pregnancy, or confirm that your pregnancy is progressing healthily."

As with most things in life, you've got to follow the instructions on the urine pregnancy test package. If you let the pregnancy test sit too long after peeing on it, the test will be invalid. Tests usually come with two in a package, and you should take both to confirm a positive result. And if your tests split their votes between pregnant and not pregnant, call your doctor and schedule that blood test to break the tie!