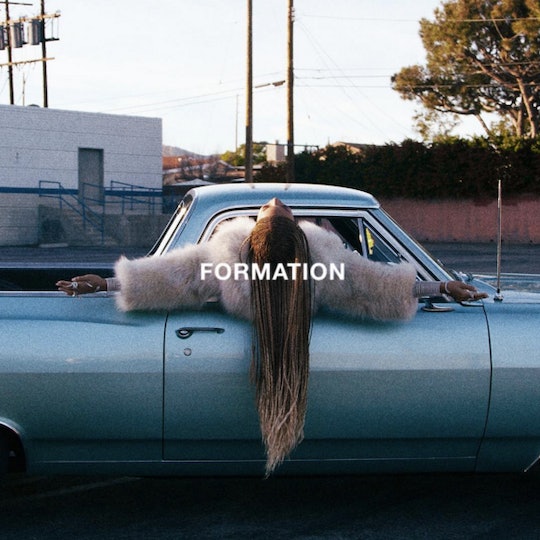 Where Can You Get Beyoncé's 'Formation' Right Now?

You know it's going to be an awesome weekend when Beyoncé graces us with a new song. Her latest single — "Formation" — is a powerful new track with more than just a catchy hook: The song and video are packed with plenty of meaning. The newest song from Queen Bey got a welcome fanfare of introduction on both her Instagram feed and Facebook page and features a cameo with New Orleans bounce artist, Big Freedia. "Formation" is both immensely quotable and totally irresistible. Here's where to get Beyoncé's "Formation" so you can put it on repeat right now.

In exchange for your email address, you can download "Formation" for free at Tidal (you'll also get a bonus offer to try Tidal free for 90 days when you do). It's a lucrative offer given the less than impressive industry fanfare for Tidal — the subscription-based streaming music service acquired by her husband, Jay Z, in early 2015. You'll have the option to download "Formation" in either mp3 or FLAC formats, and you'll have up to three maximum downloads available. If you want to get "Formation" loaded up on to your digital music player of choice, the "pay with your email" version on Tidal is your best bet.

If you're looking for your music video fix, Beyoncé has released two versions of her latest single so the first thing you need to decide if you want the "clean" or "dirty" version of the song. There's really no major differences other than some radio-safe beeps and blurring of Beyoncé giving the finger in the video. She makes the choice pretty easy when you head to Beyoncé's website right now. Seriously, if you have five minutes right now, stop what you're doing and check out the video for "Formation." It's so hypnotically gorgeous and there are lots of lush visuals to feast your eyes on.

"Formation" is Beyoncé's first major single since the surprise release of her self-titled album in 2013. Beyoncé also appeared in Coldplay's new single, "Hymn For The Weekend" in an uncredited appearance; the single was just released in January. With the release of "Formation" the day before she's scheduled to appear with Coldplay at the Super Bowl 50 Halftime Show, Beyoncé has fueled speculation that she might debut a live performance of the new song on Sunday. Celebrity reactions to "Formation" have been positive, as has the response from fans and the Beyhive who were thrilled to hear a new song from Queen Bey after such a long silence.

Beyoncé will appear alongside British rockers Coldplay during the Super Bowl 50 Halftime Show on Sunday, Feb. 7.