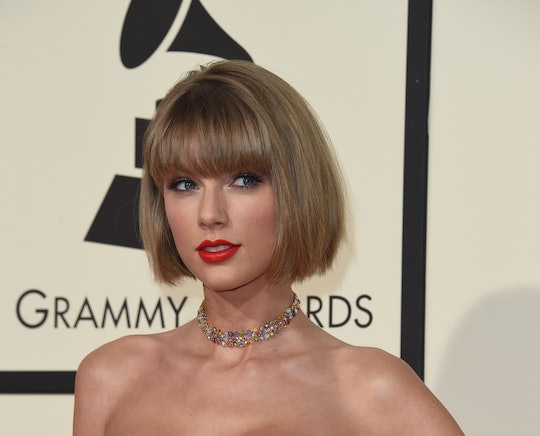 Here's Where You Can Listen To "Look What You Made Me Do," Taylor Swift's New Single

After driving her fans half-crazy with a mysterious social media campaign all week, Taylor Swift has finally released her hotly-anticipated new single. If you're wondering where you can listen to "Look What You Made Me Do," you're in luck. You can stream "Look What You Made Me Do" on Spotify or Apple Music or download from on iTunes. Unfortunately, Swift's new full-length album, Reputation, doesn't come out until Nov. 10, so this will have to hold fans for now. And while she eventually released seven singles from her last album, 1989, only one, "Shake it Off," came out before the album, so fans shouldn't get their hopes up for more new music before the fall.

While it might seem like her last album came out just yesterday, there's actually a three-year gap in between 1989 and Reputation's scheduled release date. The regular release of singles from 1989 for well over a year after its debut helped keep it fresh, but for fans, the wait for Reputation has been far too long. Swift's albums were all released at two-year intervals until now. With the arrival of the long-awaited single, fans finally have an indication of whether Reputation is worth the wait.

Of course, Swift hasn't exactly been slacking in between 1989 and Reputation; during that time, she recorded videos for "Style," "Bad Blood," "Wildest Dreams," and "Out of the Woods." She also collaborated with Zayn Malik on "I Don't Wanna Live Forever" for the Fifty Shades Darker soundtrack, and promoted 1989 with a seven-month world tour. And unfortunately, she's had to juggle her work with new provocations in her never-ending feud with Katy Perry and Kanye West, the latter of which has now grown to include his wife, Kim Kardashian.

Aside from Swift's celebrity responsibilities, she's had a lot going on in her personal life, as well. She went through two relentlessly scrutinized relationships and subsequent breakups, first with Adam "Calvin Harris" Wiles, and then with Tom "That Was Very Strange While It Lasted" Hiddleston. She served as served as maid of honor for one of her childhood best friends last year and is rumored to be in another wedding party next month. She's also been dealing with her mother's cancer diagnosis and testifying in her sexual assault case. I'm exhausted just typing all of that; the fact that she managed to record an album at the same time is actually pretty impressive. And from the sound of "Look What You Made Me Do," it'll be a good one.