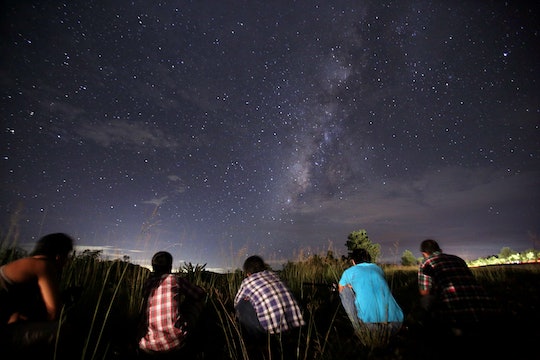 Where Can You See The Quadrantid Meteor Shower?

Looks like 2016 will start off in spectacular fashion when the Quadrantid meteor shower will peak starting at 3 a.m. on Jan. 3—4. Most meteor showers are the result the Earth's passing through comet trails and debris, but the Quadrantids are a far rarer meteor shower, given that the meteors' source is the space object known as 2003 EHI. First discovered in 1997 and confirmed six years later, 2003 EHI is described as both asteroid and "dead comet." What does this mean for us stargazers down below? Brighter fireballs and longer meteor trails, which, combined with NASA's prediction of 80 meteors per hour, should boast a satisfying stargazing experience, indeed.

But the Quandrantid meteor shower is also known for being a tricky one to spot in the sky. So where is the best place to see the Quadrantid meteor shower this year? Your best bets are going to be along the northern half of I-95 in the east: From Philadelphia to Boston, conditions should be excellent, as well as across the central United States. No such luck for the West Coast or southeastern states, as clouds are forecasted during the meteor shower. Alaska and Hawaii should also have stunning conditions in which to view the Quadrantids as well.

As with any meteor shower viewing, there are a few essentials for a comfortable viewing experience. First: Get as far away from light pollution as you can — the darker the sky, the better the view. Second: Bring a chair or a pillow — the last thing you want after hours of stargazing is neck strain from looking up all night long. Third: Bundle up — remember, it's officially winter now and peak viewing hours are almost always in the wee hours of the morning. Frostbite is no fun. A Thermos of hot cocoa pairs nicely with viewing the stars.

If you're in the lucky areas that get to see the Quadrantids this year, it should be a stunning celestial show.