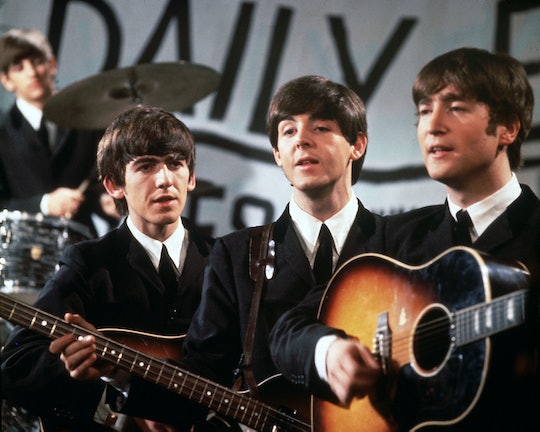 Where Can You Stream Beatles Albums? If Rumors Are True, Pretty Soon You'll Be Able To

If you don't get everything you asked for this holiday season, fear not. It looks like we'll finally have the Beatles catalog available to stream for free starting on Christmas Eve. It's all very hush-hush, but Billboard seems pretty certain that "Hey Jude," at the very least, will be available to stream on December 24th on Spotify and Apple Music, and it's feeling every-more-possible that we'll get the iconic full catalog, finally accessible via streaming. Fans and music insiders have been talking about this for a while now. Billboard reports that:

This past January, former Universal Music Group digital executive Rob Wells restarted discussions for the massive get, with papers reportedly having been signed in mid-September.

Because of how on-demand radio is licensed, the Beatles have long been available on Pandora, but this is the first time the Fab Four's catalog would be available to stream on other on-demand platforms like Spotify. The fact that Apple secured the rights to the Beatles' catalog for iTunes in 2010 makes it all the more likely that the rumors are true. Right now, the Beatles are still missing from Apple Music and other streaming services because of rights' issues.

Fans are stoked for the "Christmas miracle":

It's a big deal that the Beatles will be streaming on-demand. For the longest time, their music has been unavailable because of complicated exclusivity deals. The thing is: the Beatles don't have to give away their music to remain profitable. Other huge names, like Led Zeppelin, Metallica, and the Red Hot Chili Peppers, have also held out on giving away the rights to their tunes. It's a hot topic in the music industry because bands don't really get any money when you listen to them on streaming services. Contemporary artists like Taylor Swift and Beyonce have been withholding streaming rights to push new albums. Swift has been a vocal opponent of streaming services not having a very consistent way of compensating artists for all of the times you put a song on repeat, while you're in the shower, every day, for free.

Really, is there any other way to end the hectic holiday season? Who's up for a Beatles' streaming sesh/dance party for New Year's Eve?