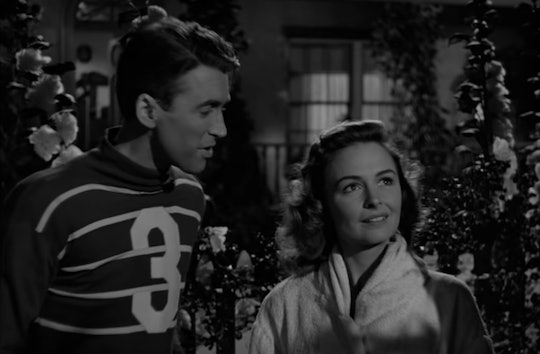 Here's How To Watch 'It's A Wonderful Life' This Holiday Season

Nowadays, there are so many holiday-themed movies for you to watch to get you in the holiday spirit in November and December. But sometimes, nothing but the true classics will do. It just absolutely would not be Christmas for some people without an annual watching of this movie, so where can you watch It's a Wonderful Life this holiday season? As TV Guide noted, the movie broadcasts on TV fairly early into the holiday season this year, on Saturday, Nov. 24 at 8 p.m. EST on the USA Network. But if you miss the network TV airing, no sweat: The 1946 ultra-classic about a small-town guy, George Bailey (played timelessly by James Stewart), who learns the true meaning of the holiday, and happiness, with a little help from a slightly drunk and somewhat irresponsible junior angel, will re-air on Christmas Eve on NBC and will also be available to be streamed all season long. So there's plenty of time to rewatch your favorite holiday classic before the season is well and truly over.

The movie, which co-starred veteran actors Donna Reed and Lionel Barrymore, will stream on Amazon thereafter and has been newly re-mastered in HD for an enhanced viewing that can be downloaded through iTunes. The movie isn't just beloved by many current viewers, it was also nominated for five Academy Awards (though it didn't win any of the five) and director Frank Capra took home the Golden Globe for his work on the film in 1947.

The PG-rated movie is also relatively family-friendly, though it does touch on some more serious themes as well. It's long, too, so the littlest kids may not entirely appreciate a full family viewing.

The movie remains popular all these years later, not only because the film itself is a holiday icon, but also because the title and certain movie lines and references have become part of pop culture and the way people talk about the holiday season (and anything else to which these lines may be applicable).

Celebs and fans around the world have long since adopted the movie's title as a catchphrase:

But even as popular as it is now, the film didn't initially experience the greatest success. Mother Nature Network noted that the film didn't even make enough from its first box office run to pay for the costs of making it. It didn't fully get its due from audiences until the 1970s and 1980s, when it started to appear on TV every holiday season.

Now that it has firmly cemented its status as a holiday heavyweight, however, it might be time to start a new holiday tradition if a viewing isn't already part of your routine this time of year. It's sappy and sentimental, sure, and that's part of why some people would just as soon avoid the movie entirely this time of year, but if you can't be a bit sentimental during the holiday season, when can you?

Whether you make sure to watch when it's on TV or you opt to stream it on your own schedule, there's still plenty of time — and plenty of options — for you to fit at least one viewing of It's A Wonderful Life in this year.