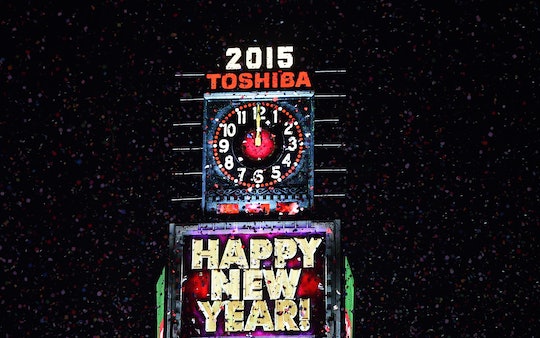 Where Can You Watch The Ball Drop If You're Staying In On New Year's Eve? Because Leaving Bed Is Uncesssary

If you're planning to count down to midnight from the comfort of your couch, you don't have to miss the celebration in Times Square. Where can you watch the ball drop if you're staying in on New Year's Eve? Thankfully, people who want to stay in will have plenty of options. (Because who said you have to leave your bed to celebrate the New Year?)

Dick Clark's New Year's Rockin' Eve with Ryan Seacrest airs on ABC beginning at 8 p.m. EST. Viewers can tune in for an epic night of entertainment featuring headliners Carrie Underwood and One Direction. If viewers don't have a TV, they can try downloading WATCH ABC or streaming the celebration on ABC's website.

Seacrest will be joined by Jenny McCarthy, known for mayhem and silliness in Times Square, and Fergie, who will host from Hollywood,. The thrilling musical lineup includes 5 Seconds of Summer, Demi Lovato, Ellie Goulding, Fall Out Boy, Jimmy Buffett, Luke Bryan, Macklemore & Ryan Lewis, Nathan Sykes, Nick Jonas, Pentatonix, Walk the Moon, and Wiz Khalifa featuring Charlie Puth. Bundling up to watch the ball drop seems a bit less appealing when there's a virtual, digital front-row seat to one of the biggest concerts of the year through a TV or laptop. (Why would anyone leave their bed?) Perhaps the biggest bonus of watching from home is that Taylor Swift is debuting her highly-anticipated "Out of the Woods" music video during the broadcast.

Looking for another option? On NBC, Andy Cohen is hosting a live New Year's Eve Game Night at 10 p.m. EST. And Full House fans won't want to miss this: Bob Saget and John Stamos will both appear on the show alongside Whitney Cummings and Sasheer Zamata. Local stations will take over for news at 11 p.m., then national programming will return for a Times Square party with Carson Daly and Gwen Stefani. Fans of The Voice may really get a kick out of seeing the two ring in the new year together. Those who want to watch can download the NBC App for their iPhone or iPad.

For partiers who prefer a newsier style, CNN is bringing back the duo of Anderson Cooper and Kathy Griffin for New Year's Eve Live. Their coverage starts at 9 p.m. EST, and people can watch on TV or use the CNN Go app to view it from their smartphone or tablet. This show gives viewers an opportunity to get involved, too. Using #CNNNYE, viewers can tweet or submit messages on Facebook.com/ac360 and they might see their words on the air.