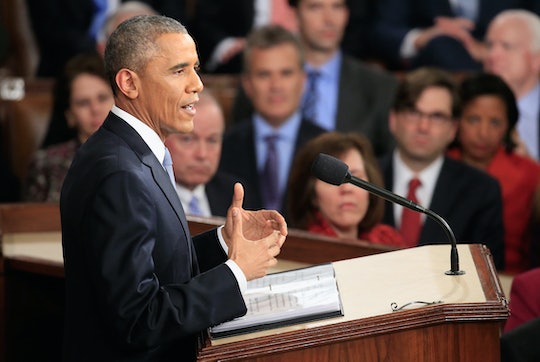 Where Can You Watch The State Of The Union Address? You'll Be Able To Watch The President Speak Even If You Don't Have Cable

Don't have a TV? Don't worry — you can watch President Obama address the nation next week right from your laptop (pajamas are optional). On Tuesday Jan. 12, the president is slated to give his annual address to the nation — so where can you watch the State of the Union if you don't have cable?

It'll be simple enough. Just make sure to head to the official WhiteHouse.gov site at 9 p.m. ET on Tuesday, and you'll be able to catch a convenient live stream event. You can even RSVP to the event on the White House's Facebook page, where there will likely be plenty of other SOTU viewers chatting it up and discussing the speech as it happens.

This is a big one, because it's Obama's final SOTU address. According to ABC News, the president is planning on talking about the nation's progress and discussing where the United States is headed. In a recent video released by the White House, Obama even gave a brief preview of his speech. "Since I took office seven years ago, in the midst of crisis," said the president, "I don't think I have ever been more optimistic about a year ahead than I am right now."

According to sources on the close to the White House, the president's address will be "non-traditional", and his team plans to emphasize audience engagement. On the White House website, Obama's team delved into a few of the administration's high points, concentrating on the economy, global engagement, climate change, health care reform, and social progress, and outlining all that Obama had accomplished in advancing policy.

After a brief recap of the president's time in office and a look forward to the new year ahead, congressional Republicans will get their chance to respond. CNN has reported that Governor of South Carolina Nikki Haley has been chosen to discuss both the "challenges" and "opportunities" facing the United States in years ahead. Haley has been making headlines since her appearance at the South Carolina state capitol in 2015, when members of the legislature removed the Confederate flag from the state capitol grounds. After the tragic Charleston church shooting in June, her response earned respect and, it looks as though she may end up being tapped as a vice presidential candidate in 2016.

Though the GOP may get the last word, Obama plans to use his speech to challenge their ability to lead. According to ABC News, it's a move designed to boost the Democratic party's message. Reported the news outlet,

White House Chief of Staff Denis McDonough said in an email to the White House listserv that Obama will tout the December budget agreement, Iran nuclear deal, improved relations with Cuba, global climate change agreement and the dwindling unemployment rate as signature achievements at risk if a Republican wins the presidency in November.

Ultimately, Obama has promised to continue to support a spirit of collaboration. In his State of the Union trailer, the president described the focus of his speech:

That's what makes America great: our capacity to change for the better. Our ability to come together as one American family, and pull ourselves closer to the America we believe in.

With the 2016 presidential primaries approaching, it's easy to forget what's happening in the heart of Washington. But on January 12, Obama will get one major chance to remind the country how far it's come and advocate for a powerful, meaningful future.