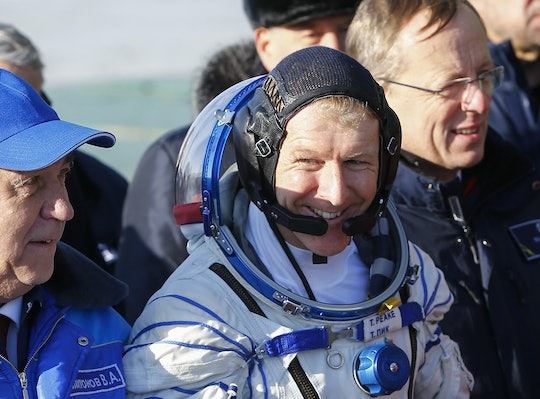 Where Can You Watch Tim Peake's Spacewalk? You Don't Want To Miss This Historic Event

He may not have won the Powerball jackpot, but British astronaut Tim Peake will soon be having what is sure to be one of the most exciting days of his entire life: he'll be taking his first-ever spacewalk off the International Space Station on Friday. And the best part? It’ll be streaming live. So where can you watch Tim Peake's spacewalk? NASA is streaming Peake’s spacewalk live on Ustream. And you're definitely going to want to tune in.

In addition to perhaps being one of the coolest things any human can possibly do, there is also a very important reason why Peake is heading outside the ISS Friday. Peake and fellow astronaut Tim Kopra will be embarking on a six-hour mission to replace a "failed sequential shunt unit" on the outside of the ISS, which, according to BBC News, "has compromised a power channel on the outpost." Without the component, solar panels on the ISS cannot be properly regulated, interfering with the ISS's power source.

In addition to being a major personal achievement for Peake, his spacewalk also marks the first time a British astronaut has performed a spacewalk for the European Space Agency, according to the Guardian. NASA official and former astronaut Reid Wiseman, who is communicating with Peake and Kopra from Houston during their mission, noted the importance of Peake's spacewalk to Britain, telling Peake, “Tim, it’s really cool to see that union flag go out. It’s explored all over the world, now it’s explored space.”

Remarkably, half of the mission to repair the failed SSU will be performed in darkness, with only the lights from the astronauts' helmets to guide them. According to the Daily Mail, the pair will work in 45-minute blocks of daylight and complete darkness, as it takes the ISS 90 minutes to orbit Earth. While it sounds unbelievably difficult, being able to work in darkness is essential to the astronauts' safety, according to BBC News: as Peake and Kopra are working on a voltage regulator powered by solar rays, there could be current running through the regulator in daylight.

And, of course, the electrical danger is not the only risk Peake and Kopra face during their spacewalk. As the Guardian noted, the astronauts will work at a speed of 17,500 mph, as going any slower would prevent the ISS from remaining in orbit:

But the biggest risk by far to an astronaut on a spacewalk? Losing their grip on the ISS. In the event that they fall off, Peake and Kopra each have a "one-shot jetpack" called SAFER (Simplified Aid for EVA Rescue) that can get them back to the station. Astronauts must train extensively for this, as it is an incredibly difficult task, and before he left on his mission, Peake spoke about the experience:

It’s a very difficult task, but I love it as a pilot because it requires a lot of coordination and you have minimum fuel. You have one shot to get yourself back safely. A couple of times I didn’t make it back, and then I got to grips with how this thing flew, and since then, touch wood, I’ve been OK.

Peake has been receiving plenty of support back on Earth though, as people all over the world prepare to watch his mission live. British Prime Minister David Cameron sent his well-wishes to Peake via Twitter, as did Paul McCartney:

Pretty sure Tim Peake is literally the coolest man in the universe right now.

More Like This
Where Are The Toys Of Toy Story Today?
Yellowstone Season 5 Officially Has A Premiere Date
'Hocus Pocus 2' Officially Has A Release Date To Look Forward To
10 Of The Raddest Movies From The '90s To Watch On Girls Night