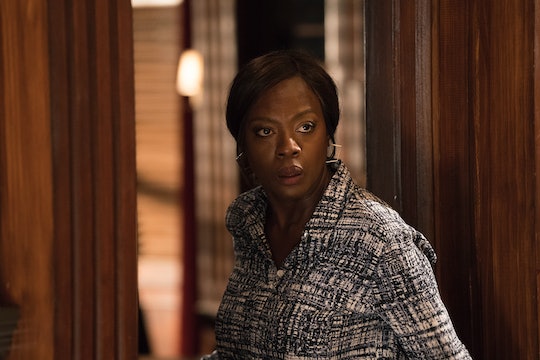 The midseason finale of How to Get Away with Murder Season 4 left several characters in a precarious positions. Laurel was hospitalized after suddenly going into labor while trapped in Annalise's elevator, and no one had any idea where Annalise (or the baby) were. One can only assume that they were together, but where did Annalise take Laurel's baby on HTGAWM? When the police arrived at Annalise's hotel room, they had no idea where she was, so it seems unlikely that she crossed paths with anyone before leaving the scene.

The flash forwards only gave the audience one hint about Annalise's fate. She was shown sitting fully dressed in the shower while blood swirled down the drain, but it wasn't clear where she was. If that happened after the birth (hence the blood), then where was the baby? Whose shower was it? These questions may be answered when the show returns with "He's Dead," but until then viewers can only speculate about what happened. And they only have the brief flash forwards to go off of.

However, a second look at the flash forwards could indicate that Annalise didn't take Laurel's son anywhere. It's possible he's not actually missing at all.

That's a big jump, but bear with me. It's natural to assume that Annalise and the baby are together because they both appear to be missing and she was last spotted giving the newborn CPR. But there is a chance that only Laurel was out of the loop when it came to her son's location. When she woke up screaming for her baby, Frank was there to comfort her, but the show didn't let the audience hear exactly what he said. No one knew how he answered that question. He could have told her the baby was missing, but he also could have been reassuring her that her son was fine.

It's just a theory, but perhaps Annalise stayed at her hotel long enough for the ambulance to arrive so that they could take the baby to the hospital. That would mean the baby was there the whole time Laurel was, but she just didn't know it; perhaps Michaela was even visiting the kid when Isaac stumbled upon her mid-meltdown. Annalise could have disappeared after the ambulance's arrival, evading the police and heading to whatever hideaway allowed her to have access to a shower (my guess is Bonnie or Nate's place). Maybe everyone but Laurel (and the audience) knew where the baby was from the start, but the show was holding off on the reveal for maximum drama.

In an interview with TV Guide, showrunner Pete Norwalk discussed that theory, calling it "a little too optimistic," but also adding, "Stranger things have happened on this show, we might surprise you with a good news option."

If Annalise did take the baby, then she probably brought him somewhere she thought was safe. She knew Laurel's father was a problem, and perhaps suspected that someone was targeting Laurel. It's more likely that Annalise would have taken the child to protect him as opposed to trying to hurt Laurel, and she only has a few safe places. Nate and Bonnie are the people she goes to whenever she's in danger, and there's no way they'd turn her down with a baby in tow. Bonnie didn't seem to know where Annalise was when she wandered through the crime scene in the flash forwards, but she's always been good at keeping secrets.

It's difficult to say exactly where Annalise and Laurel's baby ended up, but hopefully they'll both be found soon. As a premature newborn, the baby is likely in need of immediate medical attention, so if he is missing after all (and not conveniently safe at the hospital already), then Annalise will need to get him care — and quickly.