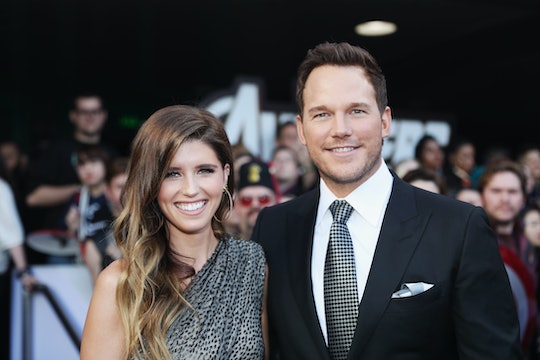 When Chris Pratt and Anna Faris announced their split back in August 2017, it's safe to say many fans were crushed. But the relationship wasn't meant to be, and the public seemed to take the news of Pratt moving on with Katherine Schwarzenegger pretty well. In fact, ever since Pratt and Schwarzenegger went public with their relationship, fans have been itching to know more about the famous couple. And if you're curious to find out where Chris Pratt and Katherine Schwarzenegger first met, you've come to the right place.

On Monday, July 22, Extra caught up with the Jurassic World actor at the grand opening of Jurassic World: The Ride at Universal Studios in Hollywood, California. While there, Pratt responded to the question of whether actor Rob Lowe was the one who introduced him to his wife, Katherine, which prompted the dad-of-one to open up about their romantic history. "We met at church!" the newlywed explained. "There’s a lot of kismet, a lot of connections, but that is where we met."

Oh, and if you were wondering why Schwarzenegger wasn't by her husband's side at the opening of the new ride, she was busy at home making tie-dyed shirts with her step-son, Jack. How sweet!

The whole meeting at church thing makes complete sense, considering religion plays a major role in both Pratt and Schwarzenegger's lives, according to People. In fact, their faith has played a role in just about every step of their relationship. "Sweet Katherine, so happy you said yes! I’m thrilled to be marrying you. Proud to live boldly in faith with you,” Pratt captioned a photo of himself and his new fiance following their engagement.

And in June 2018, the pair were first spotted together after attending a church service with Pratt's son, Jack. “They’re very compatible and have a lot in common,” a source told People at the time. “Family is very important to both of them, as well as their spirituality."

They have the same outlook on the world, and their faith ties them together. He’s really impressed that she’s vocal and unashamed about her beliefs in God, because that’s how he is. He’s constantly around other people who have no faith or are apologetic about it, but not her. She is willing to talk about it to anyone who will listen.

Of course, spirituality played a big role in Pratt and Schwarzenegger's June 8 nuptials, according to Us Weekly. Case in point: Both of their social media announcements mentioned faith, with Pratt writing: "Yesterday was the best day of our lives! We became husband and wife in front of God, our families and those we love. It was intimate, moving and emotional. We feel so blessed to begin this new chapter of our lives."

Clearly, Pratt and Schwarzenegger's shared faith is an important component when it comes to their relationship. So, it makes complete sense that they first met while attending church. I mean, of course they did.

But seriously, though — I need more details. Did somebody introduce them while inside a church? Did one of them seek the other out after the service? I guess fans will just have to wait and see.