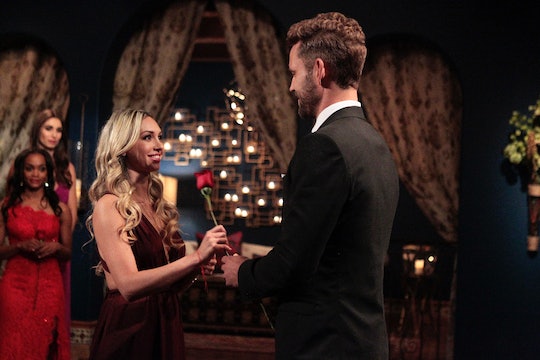 'The Bachelor's Corinne Hails From The South

With The Bachelor (and its many spin-offs), every so often a contestant comes along who you immediately realize is going to be an iconic figure in the reality dating show's colorful history. Corinne Olympios is clearly going to be one of the more memorable "villains" from any of the four shows in the franchise. Right off the bat, we learned a lot about the blonde beauty's career and family, but little about her educational background. So where did Bachelor contestant Corinne go to school?

Unlike many of the other contestants this season, detailed information about Corinne's educational background isn't widely available. According to a LinkedIn profile with Corinne's name and photograph, she attended Florida International University where she participated in theater. The profile seems to be very old and little used — she has only one LinkedIn connection and the information listed is very sparse — but FIU does make sense as Corinne's alma mater.

During her introduction segment in the season premiere, the Bachelor Season 21 contestant explained that she hails from Miami, Florida and lives at home with her family, where she runs the family business. FIU is located in Miami as well, so it follows that she might have attended that university while remaining near her home and family, who clearly mean a lot to her. Corinne's social media profiles don't feature any obvious photos from the 24-year-old's time in school, so it's unclear whether Corinne actually did attend that school or if she ever graduated.

Corinne's listed participation in theater at FIU also makes sense, given her career history. Though the Miami blonde only discussed her work with her family's business in her Bachelor bio and while on the show, some light internet sleuthing turned up her acting and modeling past. The girl with a self-professed heart of gold has active profiles on both Model Mayhem and Explore Talent, where she expresses her love for and experience in the entertainment industry. She also has several Instagram posts of herself on set filming for a variety of projects.

According to Corinne's Explore Talent bio, she even shot a television pilot called "Unorthodox Approach," among other music video and print modeling shoots.

I have worked on music videos with artists such as Pitpul, Akon, Acehood, DJ Kahled, and lil Jon, Two chainzz, and juicy j. I have done print work for Net Pinky, which is a website for lingerie and swim suits, likerr clothing, CoverMale underwear line, and a Nike campaign. I shot a tv show pilot called "unorthodox approach" I take direction very well and I am really easy to work and get along with!

As for the apparent season villainess' other career — running her father's business — it doesn't appear that Corinne's educational background played into that much. Theater is Corinne's only listed activity, so it's unknown whether she actually went to school for business management, or if she just sort of incidentally fell into working with the family company.

Either way, based on her intro segment, it's clear that running the "multi-million dollar family business" is important to Corinne's character. When describing Corinne's persona this season, Bachelor host Chris Harrison even compared her show behavior with her businesswoman background, noting that "she definitely approaches The Bachelor process with a business boardroom attitude." Let's see if that attitude translates into sparks with Nick Viall! She did snag the season's first kiss, after all.