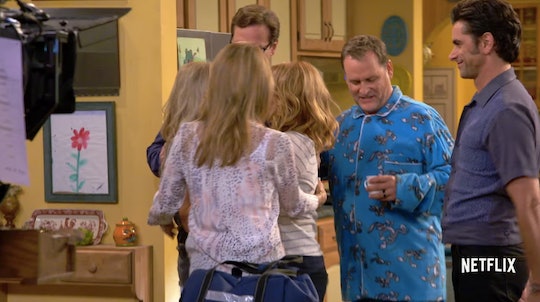 While we all know the Tanner family lived in San Francisco (duh!), and, by now, most of us know that Danny, Jesse, Joey, Rebecca, D.J., Stephanie, and Kimmy will be returning to 1709 Broderick Street when the reboot, Fuller House, debuts later this month, many of us do not know where the show was produced. (I mean, why question it; Hollywood magic is magical for a reason, right?) Silver screen magic only goes so far for fact junkies like me, and lately I’ve found myself wondering: Where was it that the cast and crew called home? More importantly, where did Fuller House film?

Well, while the iconic exterior shots in the intro were shot in San Francisco, and the house is located on a hilly, Rice-a-Roni-style street, it seems most of Full House and Fuller House was filmed on a set in Burbank, according to IMDB. (No way, Jose!) The series, which was, and still is, a Warner Bros. production, was filmed at 4000 Warner Boulevard, the same lot which houses The Big Bang Theory, Supergirl, and — most recently — Grease: Live!

If you don't know what Full House was — or what Fuller House is — I pity you. (Seriously, I am so very sad.) But for those who live under a rock, or weren’t alive in the '90s, let me explain: Fuller House is the Netflix reboot of Full House, a family sitcom which chronicled the life of a widowed father, his three daughters, his best friend and his brother-in-law. While the newest show comes 21 years after its predecessor ended, if the newest Fuller House trailer is any indicator of the series, it looks like the Tanner family will be picking up life right where things left off.

Well, sort of. You see, while the 90-second segment includes plenty of throwbacks only Full House fans can truly appreciate, like a "talk to the hand" reference, the hammer dance, and one of the shows classic catchphrases, "Cut it out", à la Uncle Joey (Dave Coulier), the clip primarily focuses on the Tanner sisters, D.J. (played Candace Cameron Bure) and Stephanie (played by Jodie Sweetin), and their best friend Kimmy (played by Andrea Barber).

Within minutes of the trailer's release, Twitter fans went wild:

Fuller House is produced by Miller-Boyett Productions and Jeff Franklin Productions, in association with Warner Horizon Television for Netflix. Robert L. Boyett, Thomas L. Miller, and Jeff Franklin are the show's executive producers of the new series, and John Stamos is a producer.

Fuller House season one should be available for streaming (ehem, binge-watching) on Netflix on February 26. And Uncle Jesse's words have never been more appropriate: Have mercy!