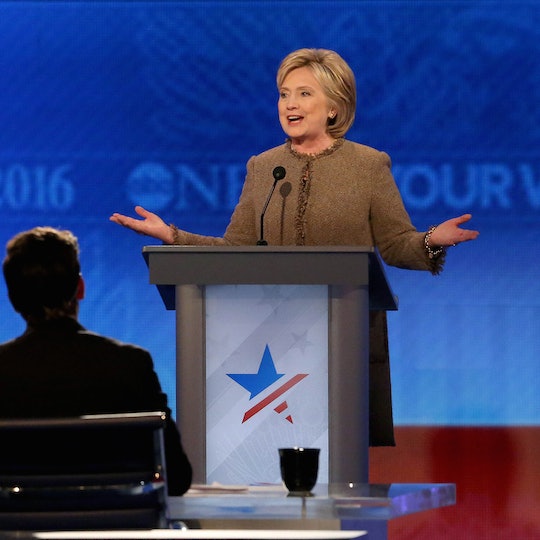 Where Did Hillary Clinton Go During The Democratic Debate? Her Podium Was Empty After The Commercial Break

When the camera returned to the main stage at the ABC Democratic debate, Hillary Clinton was missing from her podium. Where was Clinton after the break? Some joked that she was drinking Chardonnay backstage, while others speculated that maybe the line for the ladies' restroom was long. When the debate resumed after a commercial break, the moderators seemed confused that Clinton wasn't on the stage, but they decided to start the questioning anyways. They began talking about Wall Street and campaign finance — an issue that Clinton is heavily criticized for — and included Clinton once she finally got back.

But still, Twitter noticed that she was gone, and some thought it was kind of rude that the questioning began without her. Megan Carpentier of The Guardian joked that the other male candidates and the moderator who began the questioning may not have understood just how long it takes sometimes for women to get in and out of the bathroom: "I guess men really don’t know what we have to do to use the bathroom (and that’s not even counting if you’re wearing “shapewear”). But, hint hint, boys, we can't just stand there and unzip."

New York magazine writer Marin Cogan had quite a brilliant idea about what Clinton may have been doing backstage, according to Twitter: "Hillary was backstage asking for a Chardonnay and trying to get the sounds of two dudes shouting out of her ears." Because wine cures everything.

But,really, it's totally unclear what Clinton was doing backstage, but she probably had a good reason for being late. She made quite the entrance once she returned though. She just strolled casually back up to the podium:

Once Clinton returned to the stage, she faced direct attacks from both Vermont Sen. Bernie Sanders and Former Maryland Gov. Martin O'Malley that she has been taking money from big banks. But she fired back, according to the Guardian:

I have more donations from students or teachers than I do from people associated with Wall Street.

Though she'll receive flak for her strange disappearance, she didn't let the awkward moment throw her off of her game. Honestly, it wasn't that big of a deal.

And her return was seriously epic.