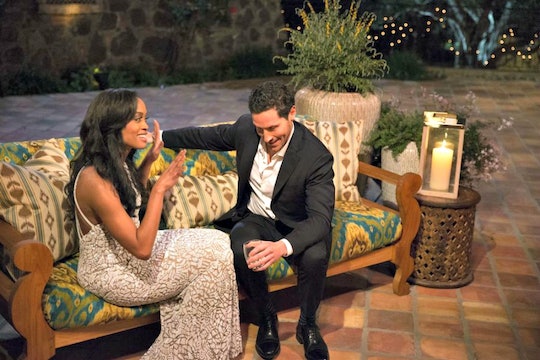 It's not often that fans immediately know any Bachelor or Bachelorette contestants' full names, but this season, there was one suitor who wanted everyone to know exactly who he is from the very first day. It's Stone, Jack Stone. So what's going on with this guy? We know he's also an attorney, just like Rachel — but where did Jack Stone from The Bachelorette go to school? Luckily, he's a Texan just like our lovely leading lady, so they have a few things in common already. It's actually pretty likely that the two may know of each other or at least each others' firms.

Jack got his undergraduate degree at the University of Texas in 2008 and then went onto the law school at his alma mater. He completed his law degree in 2012 and now Jack, who changed his name from Oberstein to honor his mother who passed away, works at Winstead PC in Dallas. Interestingly enough, Rachel also went to the University of Texas, graduating in 2007. (It's a big school, so it's not like they would have ran in the same circles.)

For law school, Rachel left the state and headed to Wisconsin to attend Marquette University. There, she clerked at the Milwaukee public defenders' office and worked on the legal team as an intern for the Milwaukee Bucks. She then returned to Dallas, working at a few firms before landing at her current gig with Cooper & Scully, P.C., which is also in Dallas.

It's pretty refreshing that the producers chose men for Rachel that might actually be really good matches for her. Not that sharing work or a hometown is essential for a great relationship, but it's always nice to be on the same page. Maybe even if Jack and Rachel don't end up together, they can hang out in Dallas together and talk shop. Or at least about how out of control DeMario and Lucas were.

It's sweet that Jack changed his name for his mom. In his official bio he says that the person he most admired was his mom, who died when he was 18 years old and still in high school. "While battling cancer, she always stayed positive and had a zest for life until the very end," he said.

Jack and Rachel haven't spent too much time together yet, but it looks like he held his own on the mud wrestling group date and the cocktail party afterwards. All-in-all, he seems like a down to earth, smart guy, who's here for the right reasons. So it'll be interesting to see what lies in store.