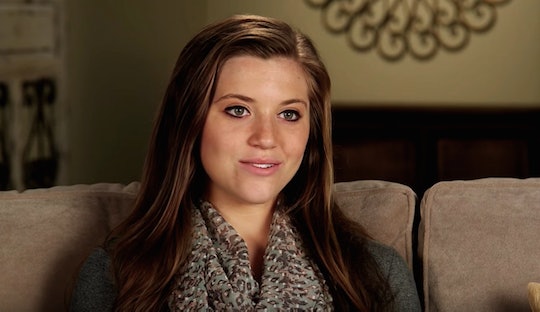 Here's What We Know About Joy-Anna Duggar Birth Plan

In case you missed the exciting news this morning, Joy-Anna Duggar gave birth to a baby boy named Gideon on Friday, according to PEOPLE. Now that the word is out, people have a lot of lingering questions about the birth and how Joy-Anna is doing post-delivery. Most of all, people are wondering exactly where Joy-Anna delivered Gideon. Considering the Duggar family tends to prefer home births, Counting On fans are quite curious if she kept up with this tradition. So, where did Joy-Anna Duggar give birth? Fans might be surprised to learn that Joy-Anna approached her birth plan with an open mind.

Following the announcement of Gideon's arrival, many fans took to Counting On's Reddit forum to analyze his birth details, and most commenters couldn't help but marvel over Gideon's weight and length. "The thought of a nine pounder makes me cringe. 10 lbs? Yikes. So glad it’s not me," one person wrote. "Both my kids were 7 lbs and that hurt. I couldn't imagine pushing out a 10 lb baby," someone else said. Another person chimed in: "'22' is a looooong baby. No wonder the little guy is over 10 pounds."

And given Gideon's impressive size, people started speculating about whether Joy-Anna required a C-section delivery. Although some people pointed out that Gideon's first photos were probably shot in a hospital, others weren't so sure. When one commenter expressed hope that Joy-Anna had a C-section, a parent replied, according to Reddit:

I’m going to guess not since it looks like she was at home when this photo was taken (i’m assuming yesterday?) which would’ve been only 2 days after delivery. for my c/s i was admitted for 5 days, I know some hospitals do shorter stays than that for c/s but I haven’t heard of one that short.

Obviously, this is all speculation and Joy-Anna has yet to confirm where she gave birth. What is clear, however, is that she planned on giving birth at home. In a video shared by TLCme Now on Monday, a pre-delivery Joy-Anna revealed:

We got the birth pool set up, we got our house somewhat cleaned out, and we’re trying to finish the big projects before the baby arrives. I think now we just need to fill up the pool and hopefully set up some beds in the guest bedroom and we’ll be good to go.

But Joy-Anna was quick to point out that if things didn't go as planned, she'd find another option. Pretty relatable, right? Many expecting parents are armed with a Plan B just in case something goes awry. Joy-Anna explained, according to the Inquisitr:

The advice I have gotten is to be flexible and prepare for the birth, have plans but if something doesn’t go as planned, then have another plan.

I think it's a safe bet Joy-Anna's flexible birth plan will prompt a discussion about Jill Duggar's difficult attempts at home births. Both times Jill tried to deliver in a pool at home, she ended up requiring C-sections at the hospital. In the case of Jill's eldest son, Israel, doctors had to perform an emergency C-section following 70 hours of labor. Shortly after the birth, Jill revealed, according to Us Weekly:

I went to the bathroom and I noticed some meconium staining on my pad, and usually that is a sign of fetal distress in the baby. It was more mild so it was like, 'okay, he's not doing too well but it's not an emergency at this point.

So, I wouldn't be surprised if Jill advised Joy-Anna to be adaptable during birth given her personal experiences. It's clear that Joy-Anna and her sisters wouldn't put their children in harm's way if something didn't go according to plan.

Luckily for Joy, her husband, Austin Forsyth, promised to coach her through labor. "I am planning on being Joy-Anna’s coach," Forsyth shared in the video, according to the Inquisitr. "And just being there to clam her down and help around whatever she needs.”

And as for whether fans will get to see the birth on Counting On, I predict the answer is yes. Both Jill and Jessa Duggar aired their deliveries on the show and I don't see why Joy-Anna wouldn't follow suit. So, the answer as to where Joy-Anna is probably not too far off. Stay tuned.