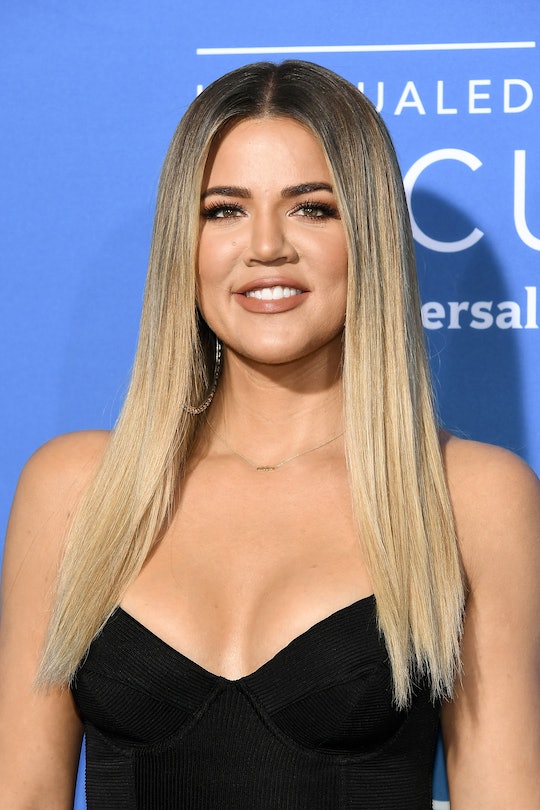 Khloé Kardashian Is Officially A Mom! Here's Where She Welcomed Her Baby Girl

The big day finally arrived! Khloé Kardashian gave birth to her first baby and the Kardashian-Jenner family now has another sweet little girl to dote on. According to TMZ, the 33-year-old welcomed her daughter early on Thursday morning with her family and boyfriend, NBA player Tristan Thompson, by her side. The reality star had been living somewhat of a bi-coastal lifestyle throughout her pregnancy due to Thompson's base in Cleveland, where he plays for the Cavaliers. So where did Khloe Kardashian ultimately give birth to her daughter?

The Keeping Up With the Kardashians and Revenge Body star had reportedly talked about going back to Los Angeles but ended up spending the last month of her pregnancy in Cleveland, according to Us Weekly. A doctor told the magazine that after 37 weeks it's too late for most moms to be in the air, even if there is a doctor along for the flight. TMZ reported that Khloe gave birth early — around 4 a.m. ET — with her mom by her side at a hospital just outside Cleveland.

Khloe has been vocal about wanting a baby going all the way back to her relationship with ex-husband Lamar Odom. She received disheartening news from a fertility doctor though when she visited one to see about becoming her sister Kim's surrogate. According to E! News, the doctor told Khloe her reproductive system didn't look as young as her 32-years, and didn't have the follicles he would expect to see, which could prevent her from getting pregnant. So it was a happy day for everyone when Khloe announced her pregnancy with boyfriend Tristan Thompson last fall.

The designer and TV star had already essentially moved her life across the country to be with Thompson, making a home for the couple in Cleveland. She wrote on her blog:

Moving into your significant other's home is a huge step in a relationship. Fortunately, Tristan and I have very similar decor tastes, so it was easy to merge. But we did a few rooms together and switched up the color schemes. That was really fun! One of the first things Tristan and I did when we moved into together was add framed photos of ourselves as a couple around the house. It makes you both feel in sync and like home is for the both of you—because after all, it is!

Unfortunately, cheating allegations have recently rocked the pair after the Daily Mail released photos purporting to show Thompson allegedly kissing another woman at a club. Romper's requests for comment from both Thompson and Kardashian's team regarding the cheating allegations were not immediately returned.

The Kardashian clan reportedly rallied around Khloe who, according to E! News desperately wanted to return to L.A. though her late-term pregnancy made it too dangerous. Instead, TMZ reported Kris Jenner and Kim Kardashian flew to Cleveland with mom arriving on Wednesday and Kim scheduled to fly out today.

Khloe's new daughter will undoubtedly be a spark of joy for the whole family. This week she posted a sweet photo of herself kissing Tristan with the caption, "We are ready whenever you are little mama."

There's no report yet on the name for Khloe's little girl. She joins two other girl cousins who were born this year. Kim and Kanye gave birth, via surrogate, to a girl named Chicago on Jan. 15, according to Cosmopolitan. And Kylie Jenner gave birth to a girl named Stormi with Travis Scott on Feb. 1.

One thing is for sure, with this new generation of Kardashians, Kris Jenner is in grandmotherly heaven. A source told Us Weekly that her goal will now be to get Khloe and the baby back to L.A. where she can help her figure out her next step.

Best wishes to Khloe, Tristan, the Kardashians, and especially this newest little member of the family! Everybody is hoping for nothing but the best for the new family.