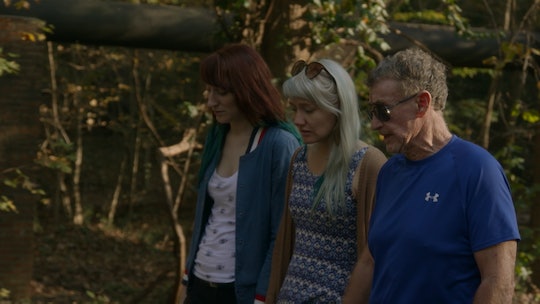 Michael Peterson's Trial May Have Been Affected By Where He Lived

Much of The Staircase relies upon its setting: not just the house where the murder of Kathleen Peterson occurred, but how the reactions of the community could have shaped what followed. Kathleen's husband, Michael Peterson, was convicted of killing her, and that certainly rocked the quiet neighborhood they lived in. But where did Michael and Kathleen Peterson live?

They lived in Forest Hills in Durham, North Carolina. Michael had previously lived elsewhere, residing in Germany with his first wife, Patricia, for many years, but he later returned to Durham after his divorce. Then it seemed he and Kathleen ended up living on the same street, with NBC News reporting that they eventually crossed paths when their young daughters struck up a friendship. They moved in together and were married a decade later.

In fact, the house that Michael and Kathleen shared for years was the site of her tragic death. It was debated heavily, both in court and by viewers, whether her death was an accident or murder, though the law determined that it was the latter. The house was placed on the market not long after Michael was convicted and, though it was an expansive property, its history almost definitely impacted its sales.

Described on Bull City Rising as being over 9,000 square feet and sitting on 3.5 acres of land, the Peterson home boasted five bedrooms and six bathrooms — enough space for Kathleen and Michael's five children. It was purchased by Jason Balius in 2004 for the relatively low price of $640k before being renovated and put back up for sale for $2.1 million in 2007. According to local news affiliate WRAL, a "self-described metaphysician, music and film producer and publisher" named Biond Fury bought the property for $1.3 million in 2008, though he apparently had no knowledge of the tragedy that had occurred within it.

None of Michael or Kathleen's children remained in Durham for long after the trial. Michael had four children of his own: his biological sons, Clayton and Todd, from his first marriage, and his adopted daughters Martha and Margaret Ratliff. Kathleen had one daughter, Caitlin Atwater, from her first marriage. The News & Observer provided an update on where each of the kids relocated: Clayton moved to Maryland, Todd to Tennessee, Martha to Colorado, and Margaret to California. Atwater chose not disclose her new hometown, but in an interview with Indy Week she shared how difficult the decision to move had been.

Atwater explained that while Durham had been her home for so long, spending time there could be painful. She returned to visit her mother's grave or see her grandmother, but felt the "watchful eye of the town" while she was there. "I have a strong connection to [Durham], but I think it's been helpful for me to remove myself," she said.

In The Staircase, Michael's defense team speculated that close-minded attitudes about his personal life might have resulted in a bias from the jury. His bisexuality and the extramarital affairs he had with men were considered evidence in the case that pointed to his motive. The prosecution theorized that Kathleen's discovery of his orientation led to a fight that ended with her death, but the defense felt that was inflammatory.

Duke University law professor Thomas B. Metzloff told the News & Observer that he felt that the characterization of a "Bible-thumping Southern jury" was unfair to Durham because its demographics indicated otherwise. He called Durham "the most liberal county in all of North Carolina," adding:

This was a good jury that looked at this case, and there was no strong evidence that I saw or anybody else saw that this jury was out to get him for some personal reason. They looked at the evidence. They weighed it differently than some other people might have.

It's difficult to determine just how much of an influence the location had on the Peterson case, but it does seem as though the two could be tied together in many ways.