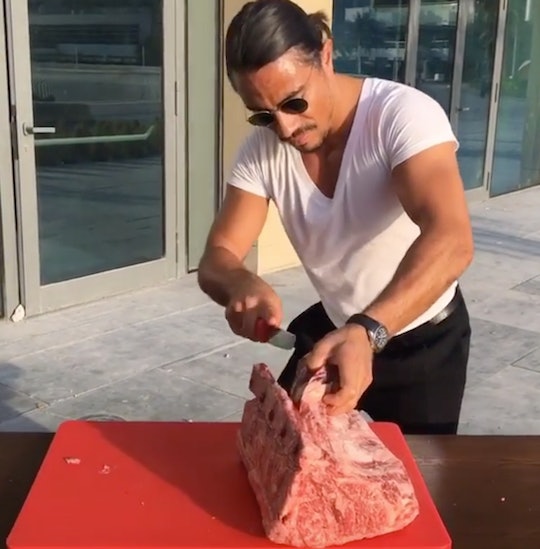 Millions of people on Instagram and all over social media have been impressed by #saltbae and his amazing skills. From the way he wields a knife, to the way he salts meat — chef Nusret Gökçe, or Salt Bae, has become an internet sensation. But those wanting to know how to cut meat like Gökçe does in his Instagram videos are probably wondering — where did Nusret Gökçe, Salt Bae, train to become a chef?

Not every chef can be like Gökçe — the Turkish chef became a major internet sensation after a video of him stylishly salting a piece of raw meat went viral. In the weeks since his viral fame, Gökçe has become a meme — and even Rihanna and Ben Affleck have been spotted wearing a Salt Bae t-shirt.

Gökçe already owns a chain of steakhouses named Nusr-Et in Turkey and Dubai — but those locations are not easy to get to. For the many fans of Gökçe who are impressed by his cooking finesse but can't make it abroad to taste his food, you can certainly try to emulate his amazing dishes — but you're going to want some training, first. So how did Gökçe learn those amazing knife skills and his salting technique?

As it turns out, some things — like Gökçe's famous salt move — unfortunately can't be taught in schools.

Because Gökçe rose to fame so quickly in the United States, there is not a lot that Americans know about the Turkish chef — who is already known in his own country. But a translated interview with Turkish website Aksam News shows that the 33-year-old chef has plenty of experience when it comes to the kitchen. In fact, he's been slicing and salting meat since he was a teen. In the interview, Gökçe said that as a son of a miner he had to leave school early due to financial difficulties. At 14 years old, Gökçe then started out as a butcher, according to Hurriyet Daily News. In 2009, according to Aksam News, Gökçe went to Argentina, where he reportedly spent three months on farms, with butchers, and in restaurants before returning to Turkey and opening his restaurants. Now, Gökçe owns six restaurants bearing his name — and is reportedly wanting to open two more restaurants in London and New York, according to Fader.

But the move that made Gökçe an international sensation was not learned in the kitchen — its just something that comes naturally. In an interview with Hurriyet Daily News, he revealed that his signature move is all him — telling the newspaper:

I did not do that to show off. It is just my signature. You can think of it a kind of final touch for a painting. It was a final touch to the meat; I was blessing the meat.

While he blesses the meat with salt, Salt Bae's signature move and amazing knife skills have certainly been a #blessing to fans everywhere — even if you can't learn them for yourself.