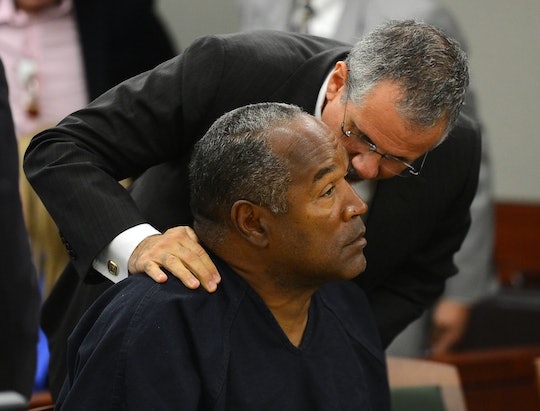 Where Did The Knife Reportedly Found On OJ Simpson's Property Come From? It's Weird

Nearly 22 years after the death of Nicole Brown Simpson and friend Ronald Goldman, and more than 20 years after the trial of O.J. Simpson — Brown Simpson's husband — and the "verdict heard the world," it seems there is new evidence in the unsolved case: a blood-stained knife. A construction worker reportedly found the folding buck knife on the Simpson estate “years ago,” according to the New York Post, but where did the knife on Simpson's property come from?

Unfortunately, details are sketchy — at best. The worker who found the knife told police he came across it while demolishing the Simpson’s home, but he couldn’t remember the date he found or where it was located, according to the New York Post. However, he is certain it was on Simpson's property.

So why are we just hearing about this knife now? It appears that when the construction worker found the knife, he immediately turned it over to an LAPD officer he found "across the street," according to TMZ. But that officer — who worked in the traffic division — was off duty at the time. Instead of contacting one of his on-duty peers, the officer allegedly brought the knife home and kept it until his retirement in January. However, after retiring, the officer contacted a friend in LAPD's Robbery Homicide Division (RHD) to request information about the case. (According to TMZ, he wanted to get the DR — Departmental Record — number for the Nicole Brown Simpson/Ronald Goldman murder case so he could engrave it on a frame for the knife.) Instead of providing the officer with this information, the individual working for RHD reportedly contacted his supervisors, and the LAPD informed the retired officer that he needed to turn the knife over immediately.

The knife is currently being tested for hair and fingerprints to see if is connected to the murders of Brown Simpson and Goldman.

Regardless of the results, since Simpson was acquitted in 1995, it is unlikely he will stand trial again, as that would fall under the "double jeopardy" defense:

[Double jeopardy is] a statue in the U.S. Constitution which prohibits state and federal governments from prosecuting individuals for the same crime on more than one occasion.

However, "what happens next" remains unclear, as this story is still developing. It is also unclear if the retired police officer will face any charges, though he has not been publicly named.