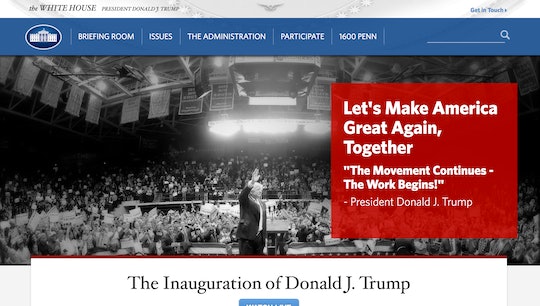 Mere minutes after Donald Trump was sworn in as the 45th president of the United States, key issues went missing from the official White House website. Sections dedicated to climate change, LGBTQ issues, healthcare, and civil rights were no longer available. So where did the Whitehouse.gov pages go?

Searches for pages once prominent on former President Barack Obama's version of the White House site yield nothing on the WhiteHouse.gov for President Trump. As Refinery29 pointed out, instead of "Climate Change," there's the "America First Energy Plan," which promises to "eliminat[e] harmful and unnecessary policies such as the Climate Action Plan and the Waters of the U.S. rule" (re: regulations that helped reduce damage to the environment and individual health).

There's no direct replacement for LGBTQ issues, healthcare, or civil rights; instead, the other issues on Trump's WhiteHouse.gov include: "America First Foreign Policy," "Bringing Back Jobs And Growth," "Making Our Military Strong Again," "Standing Up For Our Law Enforcement Community," and "Trade Deals Working For All Americans." (Of course, most of these changes were typical of a transition period, but it still caused panic, regardless.)

The reaction was swift on Twitter. Unsurprisingly, many people were dismayed that these issues were scrubbed from WhiteHouse.gov, signaling that a scary four years lie ahead.

Although the absence of these pages may seem telling, it could also be the result of poor planning. As stated, it is typical for the official White House website to change over when there is a transfer of power in the highest office. Trump's version of WhiteHouse.gov, which switched after the swearing-in, is pretty bare bones at the moment. Each of the sections included on the government site are mainstays of the government site. As for "Issues," what's listed under that section is reflective not only of everything Trump's pushed during his campaign, but also what he's promised during his inaugural speech Friday afternoon. This could just be a bad case of copy-and-paste.

To many, that's doubtful — and with good reason. Trump has not shown support for any of the issues that are missing from the new WhiteHouse.gov. He wants to dismantle Obama's Affordable Care Act, which has been a life-saver to millions. He wants to dismantle efforts to mitigate climate change. He uses racially-charged language when he talks about the economy and crime. He has called Mexicans "criminals" and "rapists," and is gunning for mass deportation. And his vice president and most of his cabinet picks believe discrimination against lesbian, gay, and transgender people should be legal.

Knowing that, it shouldn't be a surprise that these key issues are missing from the website. Instead, their absence should affirm what Trump has shown us to be true all along: He cares about power, not the people.