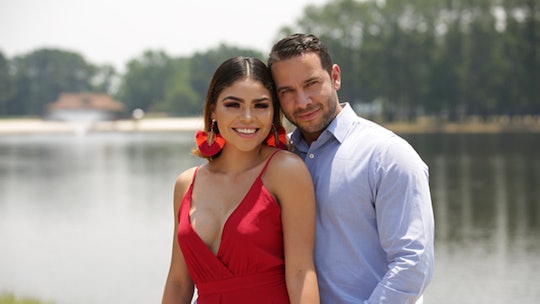 This '90 Day Fiance' Couple *Might* Live In The Windy City

The couple hasn't said much publicly about their new lives, but I would say it's fair to assume the newlyweds have started their lives in North Carolina where Jonathan works as a realtor. Then again it could also be Chicago — where Jonathan is originally from. Two places, two potential starter nests.

Despite a 12-year age discrepancy, Jonathan, who's in his 30s, and Fernanda, 19, met in a Mexico club while Jonathan was on vacation. Us Weekly reported Jonathan stayed three more days after meeting Fernanda because, well, he was into her. Three months in, and they were engaged. With Fernanda not being a US citizen, they were forced to apply for a K-1 visa to help get Fernanda into the states. The whole premise of the show revolves around this visa that only allows a 90-day engagement before a marriage must happen. If it doesn't, the foreign party isn't allowed into the US legally.

The season 6 premiere showed Jonathan's fears over their age gap. "She has a really short past so Fernanda jokes all the time that I robbed her of her youth," he said. "Yeah, I got to experience a lot in my younger days. I enjoyed that bachelor life, being alone. So Fernanda is a little more skeptical if I’m ready to leave that behind me." Sounds logical enough, especially given the fact that they've lived in different countries and may have different ways of being in general. "The biggest fear I have in these 90 days is that Fernanda would change her mind. That, if one day, she looked at me and she said, 'You know what? You already lived your life, sorry like, I need to live mine.'"

In Touch Weekly reported the age difference is hot button issue after Jonathan took to Instagram to answer fan questions, revealing he and Fernanda have been together two years. Except that would make her just 17 at the time of their meeting which is... problematic. That said, they definitely seem to be really in love now.

It's not all roses and sunshine though. In the first episode, Fernanda discovered another woman's underwear in Jonathan's house — which he explained belonged to his ex. After all the two went through to be together, this doesn't sound like the best way to start the new (in person) relationship. Hopefully, as the show goes on, viewers will see them work out the kinks. I mean, all relationships have them.

From all investigative accounts, the couple seems to be together and truly happy. They could live in North Carolina or Chicago, and may be married. Until the shows play out, nothing's concrete. Skeptics might conclude the photos are staged so not to spoil anything from the rest of the season. Where they live, if they'e actually married or not, and if their love will outlast the drama, all remains to be seen. Until then, it's always fun to speculate, as true reality TV detectives do.