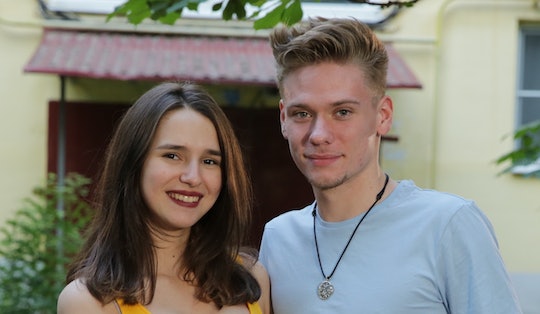 On 90 Day Fiancé, each couple is made up of one United States resident and their foreign fiancé, trying to decide if they should get married in 90 days or say sayonara. Steven and Olga are one of those couples this season, but the show is just two episodes in, and it's already hard to keep track of which couples live where. So, where do 90 Day Fiancé's Olga and Steven live?

The couple currently resides in Maryland, where Steven grew up. More specifically, Steven is from, Bowie, Maryland, but he spends his summers in Ocean City, Maryland, according to In Touch Weekly. Ocean City is where Steven met Olga, when she was visiting the resort town from Russia, where she grew up.

Olga found out she was pregnant about a month and a half after meeting Steven, and after she returned to Russia, the couple continued to discuss the best way to raise their child together. He proposed, she accepted, and they applied for a K-1 visa (and to appear on 90 Day Fiancé, both of which worked out). After giving birth in Russia, Olga and her son boogied back to Maryland, where the family of three lives on the reality show.

As TLC tweeted during the last episode, Steven was Olga's first boyfriend — and now, at just 20 years old each, they are engaged and raising a child together. However, Steven's dating history is the polar opposite of Olga's. “I did have my moments where I was kind of a little player, but all of that suddenly changed as soon as I met Olga,” Steven says to the camera in the last episode. “She’s from Russia. I was intrigued by her accent. I loved it. I never really met anyone that’s quite like Olga. She’s an adventurous person. The places that she’s been, the things that she’s done. Olga’s a smart, funny, outgoing, and like, she’s smoking hot. I scored the hottest girl on the beach.”

It's clear that both Olga and Steven are infatuated by each other — but unfortunately for curious fans, they both recently made their personal Instagrams private, rendering all the cute couple selfies invisible to the public.

If Steven and Olga are still together and living in Maryland, there's a good chance that they got married, since they only had 90 days to decide about tying the knot or splitting up. And on top of their love for each other, Steven has plenty of motivation for convincing Olga to marry him. When Steven was 7 years old, his father passed away. And as a teenager, he got arrested multiple times, leading up to his mother kicking him out of her house, according to what he said on the show. So, it makes sense that he wants to foster a more stable home for his son. “I’m going to be able to do all of the things that I always wanted to do with my own dad,” he says.

Here's hoping by the end of this season of 90 Day Fiancé, viewers have more answers about Steven and Olga.