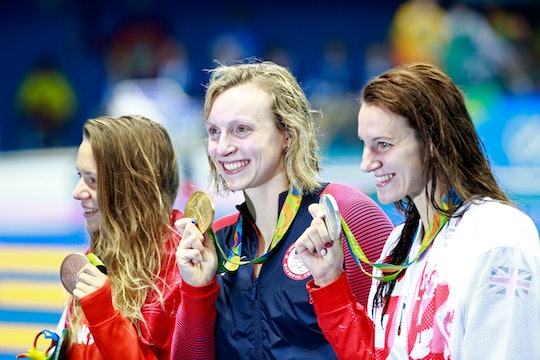 Where Do Olympians Keep Their Medals In Rio? There Are Lots Of Options

Competing in a front of a global audience is tough. But so is traveling with valuables (rolling two carry-ons through a crowded airport should be a new Olympic event). So where do Olympians keep their medals in Rio? It's really a personal choice. There isn't a standard answer, so it's probable that athletes are locking them up in hotel safes until they can get on the plane.

This year, Rio officials have given the winners security dye packs to attach to medals that explode if stolen, just like in a retail store. They aren't pretty, but it's worth it, as officials want to make sure that theft doesn't overshadow the glory of the games.

Athletes are also receiving little Olympic stands this year instead of the traditional flowers. Olympic organizers say the the stands are more sustainable than flowers and also serve as a display stand for when the athletes get back home and want to just stare at it all day, patting themselves on the back (that's what I would do, at least). The medals aren't just sentimental reminders of all the hard work, they do have monetary value. But they aren't as valuable as one might think and, in America at least, they're also taxed.

The medals aren't made entirely of the metals they are named for. According to Forbes, the gold medal is plated with six grams of 99 percent pure gold, which is required by the International Olympic Committee. They're worth about $564. The rest is silver with 92 percent purity. Silver medals are 500 grams of sterling silver and worth about $$305 and bronze medals are mostly a combo of copper and zinc and not worth much money The medals are valuable more because of what they symbolize more than anything else.

The winners also get cash prizes along with their medals. The prizes are $25,000 for gold, $15,000 for silver and $10,000 for bronze. Like any prize money, when American athletes return home they have to pay taxes on that amount, depending on their tax brackets. According to Americans for Tax Reform, that could mean about $9,900 for gold, $5,940 for silver, and and for bronze it's $3,960 for the highest earners. Those in lower tax brackets pay less according to the tax scale. Michael Phelps will have quite a bit of taxes to pay, but his current net worth is about $55 million, so I wouldn't start to feel too bad for him.

Even thought the medals sort of cost more in taxes than what they're worth, I'm sure the athletes are keeping a close eye on their prize. It's not about the gains, it's about glory, after all.