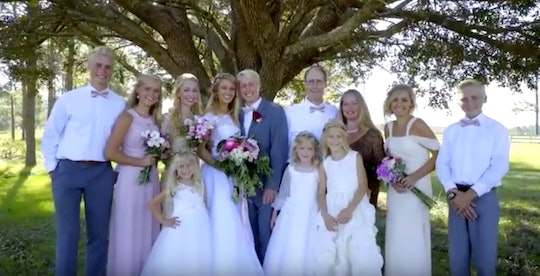 A new family is coming to TLC next month, and they're going to blow your mind. No, they don't have 20 kids. And no, they're not hoarders or parents of large-order multiples. They're the Plath family. Although they have nine children, their distinguishing quality comes in how sheltered and disconnected from popular culture the kids are. So, naturally, plenty of TLC viewers have probably wondered: Where do the Plaths live and spend most of their time?

On Oct. 16, TLC released a clip for the upcoming series, Welcome to Plathville. And I don't know about you, but I'm seriously intrigued. The show follows Kim and Barry Plath, along with their blond-haired children: Ethan, 21, daughter-in-law Olivia, 21, Micah, 18, Moriah, 17, Lydia, 15, Isaac, 13, Amber, 10, Cassia, 8, and Mercy, 6. Their oldest daughter, Hosanna, 20, is a violinist who tours with her pianist husband Timothy Noble, according to In Touch Weekly. A 10th Plath child, Joshua, reportedly died in an accident back in 2008 at just 15 months old, the Thomasville Times-Enterprise reported.

Nine is a lot of kids, yes — but not exactly a Duggar and Bates level of offspring. So what's the intrigue with this family? Apparently, the Plaths live on a 55-acre farm in a rural part of south Georgia, according to a series teaser. The kicker, though, is that Kim and Barry have somehow managed to raise their children without most modern technology — meaning their nine kids have grown up without precisely zero pop culture influence.

"We’ve structured our lifestyle here so that we can retreat to our piece of heaven on Earth,” Barry, a transportation planner who originally hails from Minnesota, says in a sneak peek of the upcoming TLC series.

Because of their sheltered upbringing, the Plaths aren't familiar with pop culture icons such as Spider Man or sports stars like Tom Brady.

"I love soccer and football and basketball," Isaac, 13, tells producers, to which one person off-camera asks, "Do you know who Tom Brady is?"

"I don't think so," Issac replies.

"This is my first Coke," Ethan says to the camera while taking his first-ever sip with a big smile on his face. "This is my first time going to the gym," he says in another clip, while (comically) using the weight machine incorrectly.

Although Barry and Kim's younger daughters share in the preview that they love living on the farm — and 18-year-old son Micah declares that he doesn't think he needs a TV — not all of the Plath kids are on the same page when it comes their parents' lifestyle choices for them. "Nothing against my parents, but you know, I don't agree with everything they say and think," Moriah, 16, admits.

Oh, and there's also Ethan, whose new wife Olivia was raised much differently than he was. And it doesn't look like Kim and Barry are thrilled with her influence on their other kids. "Now that Ethan is married, there are certain things that just have changed the dynamics of the family," Barry says in the preview video. (Ohhh, the drama!)

Honestly, I can't wait to watch some of the Plath kids rebel against their sheltered upbringing. The good news is I won't have to wait much longer because Welcome to Plathville premieres on TLC at 10 p.m. (ET) Nov. 5.