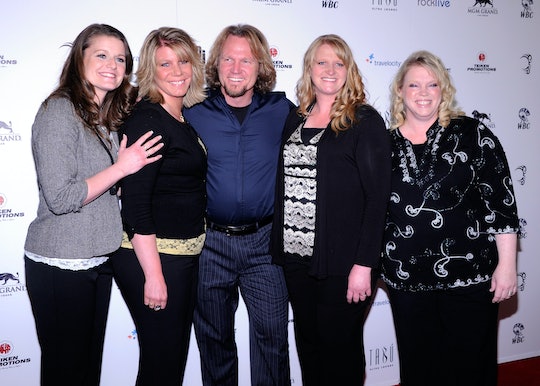 Here's Where The 'Sister Wives' Are Living Now

Season 13 of TLC's Sister Wives finds the family moving across state lines yet again. After trying unsuccessfully to lobby against Utah's strict polygamy laws, the Browns fled the state under threat of prosecution in 2011. They've been living in Las Vegas ever since, but fans may be wondering where the Sister Wives live now. The family has successfully relocated to Flagstaff, Arizona, where they're in the process of building a family home on a 15-acre lot they purchased last June, according to Page Six. The Browns spent $820,000 on the property, but until their new home is built, they're scattered across Flagstaff renting houses.

"We’re just too far apart and I miss everybody," Christine, Kody Brown's 46-year-old third wife said in an interview with Us Weekly. "It takes more effort to get together." She does remain hopeful about their communal living situation on the land they've purchased, however, adding, "My biggest hope is that we can just get out there...I can’t wait for that day."

As for the culture fit in Flagstaff, the Browns say they've felt warmly welcomed in the progressive college town. "Let’s just say there’s a lot of hippies in Flagstaff, and they’re awesome," Kody told the Associated Press, according to Page Six.

While Las Vegas was less litigious toward the polygamist family, the Browns ultimately didn't think of themselves as city people. They're outdoorsy and they like nature, so Las Vegas' oppressive desert heat just didn't fit with their lifestyle. According to US Weekly, they were frequently stuck indoors during triple-digit temperatures just to find relief.

"We are looking forwards to cooler temperatures, the mountain air, scenic views and the slower lifestyle of Flagstaff," the Browns said in a statement about the move, according to People.

According to the Chicago Tribune, the Flagstaff Police department released a memo addressing legal questions about the family's arrival, confirming that Kody would not be charged with bigamy since he is only legally married to his first wife, Robyn. (Utah's stricter polygamy laws ban cohabitating with multiple "spiritual wives.") Page Six interviewed some local residents to ask their opinions on their new neighbors, and while attitudes about the Brown's chosen family makeup varied, most residents were just concerned about their community staying as quiet and low-key as they were used to. They were hoping to avoid "environmental damage, streets blocked off for filming, more traffic and noise, or fans driving around trying to get a glimpse."

Unfortunately, renting houses for a family of roughly two dozen — plus putting down money on an eventual permanent — has left the Browns too tapped out to support Meri's dream of starting a bed-and-breakfast. As the trailer shows, she's approved for a loan to repurchase a property that had once been in her family, out of which she hoped to run a bed-and-breakfast. But she needs additional financial support from the family, which they're unable to give, and it's just one of many sources of tension the family finds themselves navigating this season. Sister Wives airs Sunday nights on TLC.