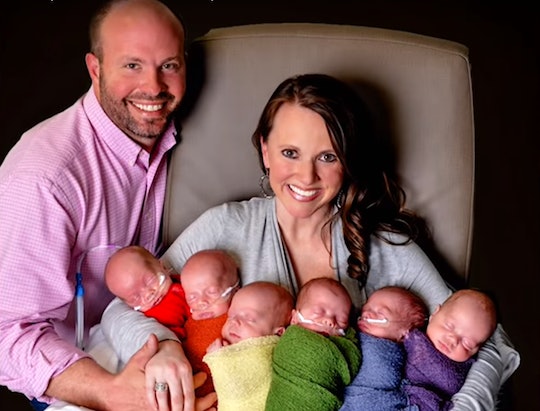 The 'Sweet Home Sextuplets' Live In The Heart Of Dixie

The Waldrops live in Albertville, Alabama, a small town about 50 miles south of Huntsville. The babies were the first sextuplets to be born in the state since 2011, and were the first set delivered at Huntsville Hospital. Their community has been very supportive, and WHNT 19 reported that the Waldrops hosted a 5k run to raise funds for the town of Albertville to thank them for the support.

The couple was born and raised in Alabama, and have been together since the eighth grade. After getting married in 2004, Eric and Courtney had their first son — Saylor — but when they tried to get pregnant again they suffered a series of miscarriages. Courtney and Eric told the outlet that they started fertility treatments, which resulted in the birth of their twin boys, Wells and Bridges, now 6 years old. “We just recently decided that we wanted to try again for another one,” Courtney told WHNT 19. “Within one month we got pregnant but we lost that pregnancy. So we knew we would have to do fertility again.” Just weeks after starting the treatment, the couple discovered that they were expecting six babies.

Initially, Eric and Courtney were concerned about the high-risk nature of the pregnancy, which came with risks of birth defects like cerebral palsy and brain disorders. According to People, and doctors recommended selective reduction — a procedure that reduces the number of fetuses in hopes of giving the rest of the babies a better chance — but the Waldrop's faith kept them optimistic. “Our faith in God is very strong, and we never would have thought we would have considered that,” Courtney told People. “But with the risks involved, no doctor could sugar coat what could happen. The risks are real for me and for the babies.”

With all the risk involved, Courtney’s medical team at Huntsville Hospital had to be prepared for anything. According to WREG Memphis, the Waldrop delivery required a team of 40 medical professionals who ran numerous choreographed drills to make sure they were prepared for everything. Each baby was assigned its own color and team comprised of nurses and neonatal specialists.

Luckily, everything went smoothly and Courtney delivered six healthy babies last December. She welcomed three girls named Rayne, Rivers, and Rawlings and three boys named Blue, Tag, and Layke. Taking care of six babies and their three older siblings can’t be easy, but on their social media pages, the Waldrops are making it look easy, with nothing but smiles and optimism. The sextuplets are now 9 months old, and on the family’s Instagram page — called Gods Divine Nine — you can see just how big (and adorable) they are getting. In one post, all nine Waldrop kids are sitting together in front of the TV, getting ready to watch their TLC series air.

Sweet Home Sextuplets will premiere on Sept. 18 at 10 p.m. ET on TLC, and the series will start with Eric and Courtney’s pregnancy journey — including her complicated labor and delivery — and will continue as they bring their sextuplets home, adjusting to life as a family of 11. In the meantime, if you want updates on the babies, you can check out the family’s Instagram page or head to the sextuplets’ Facebook page called God’s Divine Nine Sweet Home Sextuplets.