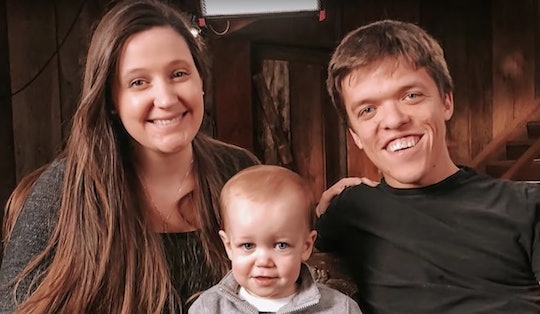 There's some exciting news in the Little People, Big World universe: another baby is on the way for Zach and Tori Roloff. With such a big change coming their way, some fans of the TLC show might still be catching up on where the parents-to-be are living, working, and what their lives look like so many years after the TV show first premiered. For instance, where do Tori and Zach Roloff live now as they prepare for their second child? As it turns out, they will likely be bringing their baby girl home to a brand new house.

For those who are unfamiliar, the Roloffs all live in Oregon state; according to the Roloff family farm's website, they are located about a half hour north of Portland. Now that Matt and Amy Roloff are separated, they live in different areas of the state. TLC previously shared that Jeremy Roloff and his wife Audrey moved to Bend, Oregon, after leaving the show, which leaves us to the whereabouts of the parents-to-be.

Tori and Zach previously owned a home in Portland, according to Radar Online, but sold it as of last year. Where did they move? Well, just 10 minutes away, though any further details on their new location are being kept private, likely and understandably for safety reasons. All in all, Tori and Zach are reportedly still in Oregon, albeit in a new house.

Perhaps they upgraded their space in preparation for a new family member to join? It's not unreasonable to assume that could have played a role in the move.

Earlier this month, the couple announced their second pregnancy on Instagram, according to People. In a photo shoot, the couple did in a field at dusk (very dreamy) with their son, Jackson, they stood together and held a one big pink and one big blue balloon, as well as a sonogram photo over Tori's stomach.

“Zachary and I are so excited to announce that Jackson is going to be a big brother! We are expecting a sweet baby girl this November!" she wrote in the caption. "Thank you so much for always supporting our family and loving us!”

This week, Tori was back on the app answering questions from fans and followers, and talked about how her pregnancy is different the second time around. "A lot harder. But still easy. If that makes sense," she said in response to how her pregnancy was going, according to Good Housekeeping. "I had no symptoms with J [Jackson] other than egg aversion. I've got all the symptoms this time." Tori also mentioned she "screamed and cried" when she found out she was having a girl, and teased fans that maybe she would share the video one day.

For his part, Zach seems just as excited to start this next chapter of their lives. He also shared some photos from their pregnancy announcement shoot on Instagram, adding: "Yay!! Tori and I are excited to announce that Jackson is going to be a big brother to a little sister!!"

Fans went out of their way to share well-wishes for the family: "I’m not sure that your family can get any cuter but I know it will," one person commented. "Congrats! A piece of watermelon fell out of my mouth when I saw this I was so surprised!" said another. "Congratulations! Hopefully your journey is being filmed for TV!" said another.

New house, new baby... there's a lot of exciting things on the horizon for this family. Though November is still a while away, we can look forward to more updates from them as the months go on. Perhaps that will include a new home tour? We can hope.