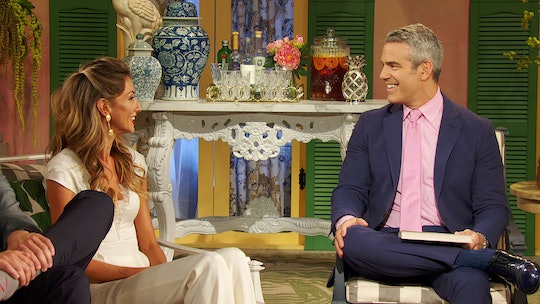 When Ashley Jacobs became involved with Thomas Ravenel, she left her home in California behind to settle in Charleston, South Carolina with him. She started to build a life there, but they've since broken up. That means Ashley had to choose between her new home in the south and her old one on the West Coast. So where does Ashley Jacobs live now?

Previews for upcoming episodes of Southern Charm indicated that Ashley didn't immediately leave town after she split with Thomas. She stayed in Charleston long enough to turn up at a few parties and cause a stir, at least. But she has since left the south behind for Santa Barbara, California. In her Jul. 10 Instagram stories, Ashley posted some short videos of the ocean with a location marker and "home sweet home" written across the scene. According to Bravo, she decided to move back to California in February 2019. She had been in Charleston for a little under two years, after relocating in August 2017.

Ashley announced the news on Instagram. She posted a picture of her South Carolina license plate atop her California one with the caption, "Thanks for the life lessons South Carolina but I'm goin' back to my roots! [sic]" She added a "California girl" hashtag, so it seems like Ashley is right where she wants to be.

But that doesn't mean she thought her time in Charleston was a total waste. Ashley told Bravo's The Daily Dish that being on Southern Charm was a "learning experience" that taught her a lot about herself. She felt very firmly about having no regrets, because she never wanted to wonder about an opportunity she didn't take. "That's why I moved to Charleston," she said. "If I didn't do it, I always would have wondered, 'What if?'" She concluded that everything happened for a reason and declared that she was stronger because of what she'd gone through.

And it seems like the other Southern Charm stars think that returning to California was the right choice for Ashley. Cameran Eubanks told Entertainment Tonight that she was shocked to see Ashley still in Charleston. She thought perhaps Ashley wanted to stick around to make amends and change the negative image fans had of her. However, Cameran said, "I was hoping that if she had any sense, she would go back to California, which is her home, which is where she's from, where all her family and friends are. I cannot believe she stuck around."

Though Southern Charm viewers haven't quite seen the last of Ashley, she didn't end up sticking around forever. She hung around Charleston for a little while, lingering just long enough to turn up at a get together in "Sorry Not Sorry" and cause a major ruckus one more time. After that, she left the world of Southern Charm behind and went home. Now it looks like Ashley is happily settled in Santa Barbara. But who knows? Maybe she'll drop by for a clambake one day in the future. It seems unlikely, but never say never.