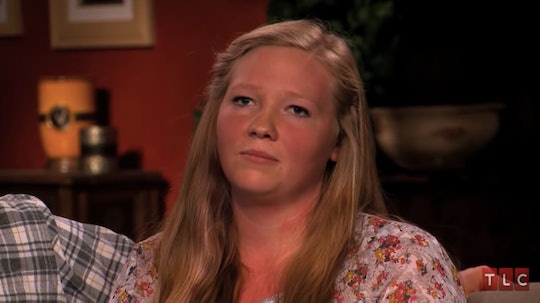 'Sister Wives' Star Aspyn Has Made A Home For Herself

Every Sunday on TLC, Sister Wives has tracked the Brown family's search for a new home in a new city. Though they lived in Utah for years, they eventually decided to relocate to Arizona. But some members of the family have already left the nest — like Kody and Christine's daughter Aspyn, who's busy attending college. So where does Aspyn live now?

According to her Instagram account, Aspyn lives in Las Vegas with her husband Mitch Thompson. She's enrolled in the University of Nevada, Las Vegas. Her social media is full of updates about her daily life, including the treats she's baked and the slowly-changing seasons of her current home state. She mentions her education, too; she posted at least one Christmas-themed picture of herself preparing to finish up her last term paper before the holiday season. She also wrote about her upcoming graduation, alongside a photo of herself on a nature trail.

"I applied for graduation and after 6 years as a student at UNLV will be graduating in May!" Aspyn announced proudly. Though she'd had some ups and downs (including a last minute major change), she was incredibly grateful for the support she'd had along the way — from her family, her husband, and her sorority sisters at Alpha Xi.

According to Aspyn's LinkedIn Account, she's been attending UNLV since 2013. She studies Human Service, Marriage, and Family Therapy/Counseling, which seems to be her new major. She had previously considered becoming a paralegal, but discarded the idea. She's been a fundraising volunteer for Autism Speaks since 2013. But that's not all Aspyn's up to. She's also an intern at the Alzheimer's Association, though it's a much newer position; she's only had it for three months. She's a key holder at the jewelry and home goods store Kendra Scott as well, after working as a sales associate there for the last year or so. She's definitely made a life for herself in Las Vegas.

But Aspyn's wedding happened in Sandy, Utah in June 2018 at the La Caille restaurant, as reported by People. Aspyn and Mitch's ceremony had several nods to his Scottish heritage, including kilts for him and Cody, as well as handmade hats for Aspyn's four moms. Aspyn and Mitch wrote their own vows and had a handfasting ceremony, which is described by People as a Celtic tradition that involves binding the couples' hands to "symbolize their connection and devotion to one another."

The rest of the Brown family had lived in Las Vegas after leaving Utah, but ultimately decided it wasn't the right place for them. Flagstaff, Arizona proved to be a better fit, though it's unclear whether or not Aspyn and her husband will be joining the rest of the extended family once she graduates. It would make sense for her to stay in Vegas since so much of her life is there, but it would also be understandable if she wanted to be close to her family.

Aspyn may be a Nevada resident right now, but there's no telling what her future holds.