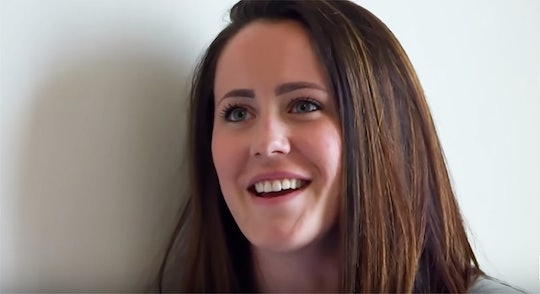 People across the United States — especially residents located in the Carolinas — are growing worried about Hurricane Florence, a Category 2 storm as of Thursday. Millions were ordered by government officials to evacuate high-risk areas in the light of the dangerous conditions, a warning many people heeded. But one person who seemingly plans to ignore forecasters worrisome predictions is Teen Mom 2 star Jenelle Evans, who lives outside of Wilmington, North Carolina.

Considering Wilmington is located in a voluntary evacuation zone, according to the Weather Channel, it's understandable why countless fans are concerned about Evans' well-being during this storm.

Anyone who is familiar with the Teen Mom 2 franchise already knows that Evans is very proud of her large home — or as she refers to it, "the land" — that she bought with her husband, David Eason, in March 2017. The sprawling property boasts recent renovations and a spacious backyard for her three kids (Jace, 9, Kaiser, 4, Ensley, 1, and step-daughter Maryssa, 11) to enjoy.

Unfortunately, however, it looks like Evans' dream house is at risk due to Hurricane Florence's 100 mph winds, heavy rain, and slow movement. And as of Thursday evening, the storm was 100 miles east-southeast of Wilmington, leading to dangerous driving conditions and flooding across the area, as CBS News reported.

Ahead of the storm's landfall on Thursday, North Carolina Gov. Roy Cooper warned residents like Evans about the life-threatening conditions, stating, according to CNN:

Please hear my message. We cannot underestimate this storm. Don't relax; don't get complacent. Stay on guard. This is a powerful storm that can kill.

National Hurricane Center Director, Ken Graham, also warned residents to take the storm seriously despite its downgraded category. "It truly is really about the whole size of this storm," Graham explained, according to The Washington Post. "The larger and the slower the storm is, the greater the threat and the impact — and we have that."

Despite all of the warnings from stakeholders, Evans and her family plan to ride out the storm at home. "Preparing for this hurricane and wow got the LAST 100 ft extension cords from the hardware store," Evans tweeted on Sunday. "Everything is going quick! #HurricaneFlorence."

Understandably, some fans expressed concern about Evans' hurricane prep, a sentiment she didn't take kindly to. After a fan took to Twitter to claim that Evans lives in an evacuation zone, she shot back: "I do not live in the evacuation zone or a flood area. Not sure what county you think I live in."

The MTV star later complained: "I love how everyone’s telling me what to do."

But many fans aren't sympathetic to Evans' frustration — in fact, it's the only thing people are talking about in the Teen Mom OG and Teen Mom 2 Reddit forum. Some post titles include but are not limited to:

Yep, I think just about everyone can agree there's a lot of chatter about Evans' safety during Hurricane Florence.

Although the speculation might seem a bit overboard to some, it does appear that the concern for Evans — especially when it comes to her innocent kiddos and pets — is genuine. One person wrote on Reddit: "I really hope she and her family will be ok. Although Harvey didn’t directly hit where I live it sat and rained over 50 inches and flooded my house. I don’t wish it on anyone! When officials are calling for evacuations you really should."

"I lived in a wooded area during Sandy. Even though I was a good 10 miles from the beach the sound of trees coming down scared me so bad," someone else shared on Reddit. "I couldn’t sleep all night thinking about a tree coming through the roof. These kids are going to be scared and if they had the means to leave they should’ve."

Going off of Evans' Instagram account, it doesn't seem like she shares fans' concern. All throughout Thursday, Evans shared Instagram stories of herself posing outside of her home, along with early shots of the storm. Hmm.

Well, fingers crossed Evans and her family remain safe throughout the coming days. Whether you agree with Evans' decision to ride the storm out at home or not, I think everyone is on the same page where it concerns her well-being.