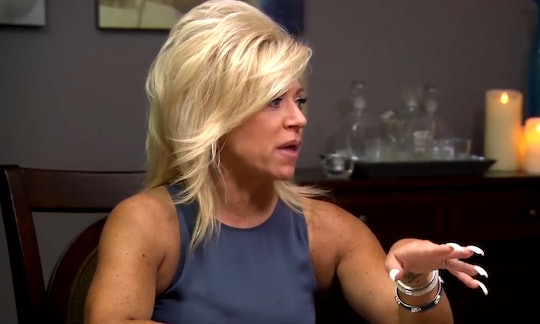 If you're a fan of TLC's Long Island Medium, you've heard the sad news of Theresa Caputo's split from husband, Larry. Though the longtime pair had been separated since last December — and before the Season 11 finale aired — the two officially filed for divorce in April. All eyes have been on the reality TV couple for years but with the [seemingly sudden] dissolution of a "solid" marriage and the 13th season of LIM having just begun, where does Larry Caputo live now?

After ending a multi-decade-long relationship, Theresa admitted to Extra back in April the state of their marriage had been in trouble for some time, though fans may not have picked up on it initially. "Right now, Larry is living in LA and I’m here in New York," she said. "We're just taking it day by day." It's unclear if Larry still resides in LA and due to his minimal social media presence, he's hard to keep up with, but the statements and information available says he likely is.

According to People, a joint statement from Larry and Theresa last December said, "We will always love each other and our two wonderful children. We are united in supporting each other and our family. Please respect our privacy during this time." Their marital struggles previously surfaced on episodes of LIM, with Theresa hinting at divorce before the official separation. Theresa said “Since the last season of Long Island Medium and through a period of time, Larry and I’s relationship has changed. We’ve been there for each other, you know, through thick and thin, you know, good times, and right now are not such great times. I don't understand it. I lay in bed, and I say to myself, 'How did this happen? How did I get here?'" Relatable.

Marriage is work and even when you're not together, you can still care about each other. Theresa couldn't conceal her emotions when previously speaking on the state of her marriage saying, “I sometimes interpret it as growing apart. I’ve changed and he has changed. We’re both not happy and, you know, it’s hard to try to work through that,” she said. “It’s not easy for me to sit here and to talk about this, to talk about my feelings, to talk about how my marriage is, but you know, things do change.”

Don't forget, it takes two to make a marriage work no matter where you live. Larry also stated the separation had to do with lack of time together. “We’re having a difficult time," he said. “I think a lot of the frustration has to do with us not spending the time together anymore. Along with that comes the lack of communication so it’s like losing your best friend. It’s hard."

Larry admitted to TMZ in June he's past the drama saying, “I have moved on. I’m fortunate enough to say that I have met someone special. But I’ll just leave it for that now." He later added "The separation was a three-month trial period and we’ve moved on from that point. We’re in divorce proceedings. That’s been going on for the last six months. It’s not finalized. I don’t know when it will be. But that’s where we’re at.”

As for what's in store on the show this season, Theresa commented on the situation in a clip saying, “We separated about a year ago and so I haven’t physically seen Larry in like, nine months." Larry weighed in after joining Theresa at a restaurant in preparation for the season premiere adding, “It’s not easy [seeing her]. After 30-plus years — how do you not have emotions?"

Regardless of Theresa's love life or where Larry lives now, fans can expect Season 13 of LIM to be chocked full of celebrity readings. And no matter where life takes the two, hopefully they each find what they're looking for.