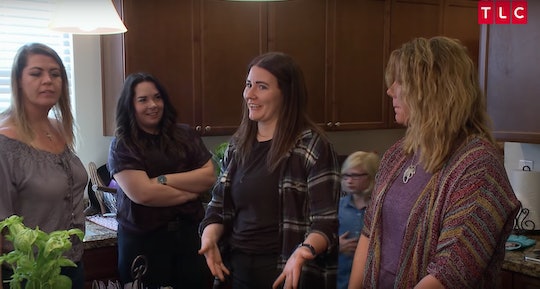 Mariah Brown, the only daughter of Kory Brown and his first wife Meri, has been making a lot of big announcements over the past two seasons of Sister Wives, and in her latest, she revealed plans to relocate. So fans of the show may be wondering where Mariah from Sister Wives lives now. With her dad and Robyn video chatting in during a recent episode, Mariah announced to the family that she'd be moving to Chicago. It's the latest in a series of exciting developments for the 23-year-old grad student.

First, in a January 2017 episode, Mariah came out to the family as a lesbian. Then, later on in the season, she introduced the family to her girlfriend and college classmate Audrey Kriss. And now that they've graduated, the couple is striking out on their own in a new city. After graduating from Westminster College together in May of 2018, Mariah and Audrey spent the summer with the Browns in Las Vegas. But Mariah soon got some very big news that would prevent her from relocating to Arizona with the rest of her family.

She had been accepted into Loyola University's graduate program for social work and social justice, and revealed that she and Audrey would be moving to Chicago in August of 2018. Audrey, who studied marketing with a minor in sociology, planned to pursue a career in advertising once they got there. The pair were quickly approved for their "dream apartment," according to an Instagram post, and got two dogs. In January of this year, at the third annual Women's March in Washington, DC, Mariah proposed to Audrey.

"We had just started dating when we came for the first time two years ago and it was such a special time for us that I wanted to propose there," Mariah said in an interview with People last month. "Our friends and family have all been so excited for us! I actually think my dad almost cried! He really likes Audrey. All of our friends have been so sweet and offering to help and our families are obviously excited to share their input."

In a March 2018 tweet, almost a year before they were even engaged, Kody tweeted that Audrey was "a lovely individual," saying that if the couple wanted him to officiate their wedding, he "would be honored." Mariah was probably very grateful for that impressive display of chill, Dad.

Now that they're in the swing of things in their new city, Audrey has been working as a graphic designer, according to her Instagram bio, as well as maintaining the couple's joint LuLaRoe business. It seems like the couple may be aiming to to develop a queer-inclusive wellness and lifestyle brand, gauging by the look their social media accounts and personal websites. (Think lots of matcha-drinking, sage-smudging, and white supremacy-dismantling workbooks.) The couple has already found promising brand partnerships, with Mariah recently posting sponsored content on behalf of Imperfect Produce, and they accomplished all of this in their first six months in Chicago. The sky seems to be the limit for these two.