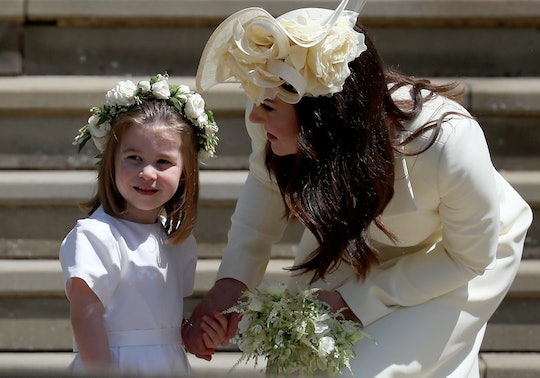 Middleton and Prince William attended an official royal engagement in the English countryside on Tuesday, where they greeted royal well wishers and shared some fun anecdotes with them about their kids. Middleton only had the sweetest things to say about Princess Charlotte, who seems to be the only person her age who isn't looking forward to the upcoming summer break. While summer is filled with family vacations, super fun camps, and days of doing nothing, Princess Charlotte apparently wants the opposite. Middleton reportedly told one royal well wisher that Charlotte was "looking forward to school", according to People, instead of looking forward to the vast summer break that she has ahead of her.

While some parents have to practically bribe their kids to get out of bed and attend school, it doesn't seem like Princess Charlotte falls in to this category. And there could be a reason why she's so excited for school — it's because she will be joining her older brother, Prince George at the same school in just a few months.

Princess Charlotte and Prince George will be attending Thomas's Battersea together, according to Entertainment Tonight. The school's headmaster, Simon O'Malley released a statement about this decision late last month. "We are delighted the Duke and Duchess of Cambridge have decided that Princess Charlotte will join her elder brother, Prince George, at Thomas's Battersea," he said. "We greatly look forward to welcoming her and all of our new pupils to our school in September."

Before this, Princess Charlotte had only been in a nursery school, which she had been attending since she was around two years old, according to Town & Country. Needless to say, Princess Charlotte is really going to enjoy the change of pace and scenery. Thomas's Battersea's curriculum is extensive, according to People. Students attending Year 1 (the year that Princess Charlotte is headed in to) learn all of their core subjects (including geography and religious studies) in addition to being introduced to new languages, art, drama, and physical activity. It's going to be so much better than nursery school. And who wouldn't want that?

But, this isn't to say that school will be a walk in the park for Princess Charlotte. There is a bit of homework that comes with being a Year 1 student at Thomas's Battersea, according to People. On top of this, Princess Charlotte will have to recite poetry, take part in group discussions, and practice having to read out loud to others. While this sounds like such an engaging curriculum, Prince William revealed to well wishers in 2017 that Prince George was reportedly fed up with school, according to the Telegraph.

"I just dropped George off and he didn't want to go," Prince William reportedly said at the time.

But, it doesn't seem like Princess Charlotte will have that problem, especially since the little girl is so excited to attend school three months from now. She really is growing up, isn't she?