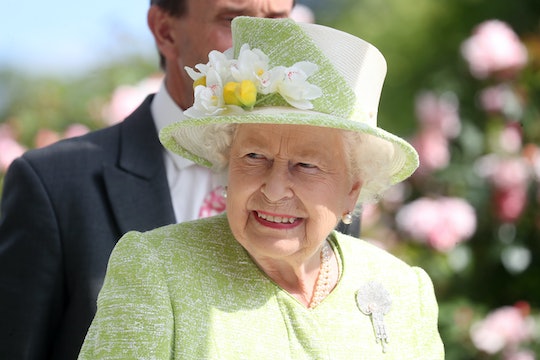 Where Does Queen Elizabeth Stand On LGBTQ Rights? She's A Modern Monarch

When you've been the ruling monarch for more than 66 years, it's almost certain that you've witnessed incredible change — as well as huge progress in societal values. And for Queen Elizabeth II, this is absolutely true. I mean, just think about it. Up until a few years ago, the rules surrounding the line of succession still prioritized male siblings. But now, Princess Charlotte is actually ahead of her younger brother Prince Louis. In light of Pride month, plenty of royal fans have probably wondered: Where does Queen Elizabeth stand on LGBTQ rights?

Although Queen Elizabeth doesn't speak often on the topic, it doesn't take much digging to figure out this modern monarch's views on LGBTQ rights. In 2017, for example, she vowed to support equality for all, according to Town & Country magazine. "My government will make further progress to tackle the gender pay gap and discrimination against people on the basis of their race, faith, gender, disability, or sexual orientation," she said during the Opening of Parliament, before tackling other subjects such as mental healthcare, climate change, terrorism, and more.

As Pink News reported, this was actually the first time LGBTQ rights had been addressed during a speech by the Queen since 2003. At that time, she promised to increase "equality and social justice by bringing forward legislation on the registration of civil partnerships between same sex couples."

But just because she hasn't brought up LGBTQ equality in speeches very often, doesn't mean she hasn't taken tangible action in favor of it. In 2013, Queen Elizabeth signed the Royal Assent for gay marriage, according to the Independent. This effectively legalized gay marriage as well as gave it the royal seal of approval. And apparently, comedian Stephen Frey heard Queen Elizabeth's offer her personal feelings on this legalization measure, the Daily Beast reported.

When the queen signed the Royal Assent for the Equal Marriages Act, allowing gay people to marry for the first time, she put it down and said ‘Well, who’d have thought 62 years ago when I came to the throne, I’d be signing something like this? Isn’t it wonderful?'

Although Queen Elizabeth wasn't in attendance, her cousin Lord Ivar Mountbatten became the first royal to have a same-sex wedding when he married his partner James Coyle in September 2017, according to Business Insider. Lord Ivar publicly came out in 2016 after gay marriage was legalized.

If you think about it, though, it hasn't been that long since private homosexual acts between men over 21 were decriminalized in the UK. That didn't officially happen until 1967, according to The Guardian — although there were still 30,000 gay and bisexual men convicted between 1967 and 2003, despite this ruling. (Which, WTF.)

So, there you have it! Although she isn't overly vocal about it, Queen Elizabeth does seem to be a supporter of LGTBQ rights. Will she be sporting a rainbow Pride suit and matching hat anytime soon? Highly unlikely. But royal fans can rest assured that the Queen is a fellow ally.