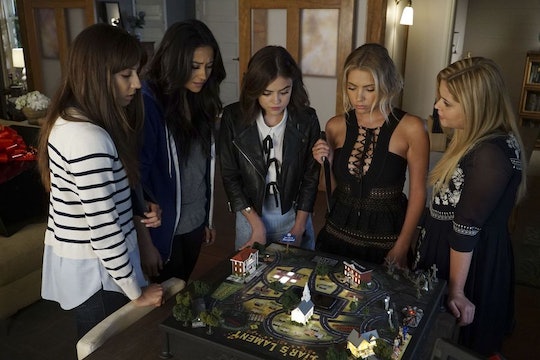 The 'PLL' Board Game Is Leading To Something Big

The final 10 episodes of Pretty Little Liars has been dubbed #PLLEndgame, so it shouldn't have been all that surprising to discover that these last episodes are centered around a literal board game. As the Liars play A.D.'s game, they continue to be given puzzle pieces and Spencer, being the smart one, figured out that the pieces appear to make up a map of some sort. So where does the board game map lead on Pretty Little Liars? There are a lot of possibilities.

The most obvious guess would be Radley. Fans know by now that all roads lead to Radley. However, why would the Liars need a map there? They know where it is. Unless the map shows them some hidden part of Radley that they didn't know existed. That's definitely a possibility.

Another possibility is that the map will lead them to A.D.'s lair. Jenna was taken there after Spencer was shot and fans have seen it at the end of multiple episodes, but the Liars have no idea where it is. Maybe the map will lead them there. Then again, why would A.D. want to give the Liars a map to the hide out? Is it a trap or is this how A.D. plans on finally revealing himself/herself? It's hard to say.

The map could also lead to Mary Drake. Ever since she admitted to being Spencer's mom she's been AWOL. Is she really hiding out or did A.D. take her and hide her away somewhere? That could be how A.D. ended up with the letter that first got Spencer to play the game. It's possible Mary Drake is actually in danger and while the Liars play the game, A.D. is holding Mary Drake hostage.

But why would A.D. kidnap Mary? Just to get at Spencer and Ali? Probably not. One potential explanation for this could be that A.D. is Mary's other child and/or Spencer's twin. It's possible that the map will lead to both Mary and A.D., which is when all will be revealed and the Liars (and fans) will finally know the truth.

It's also possible the puzzle isn't even a map at all. Though Spencer is almost always right, she could be wrong about this one. The Liars only have two pieces so far and that's less than a third of the full picture. It may look like a map now, but it could turn out to be something else entirely. Fans will just have to keep watching to finally discover the truth.