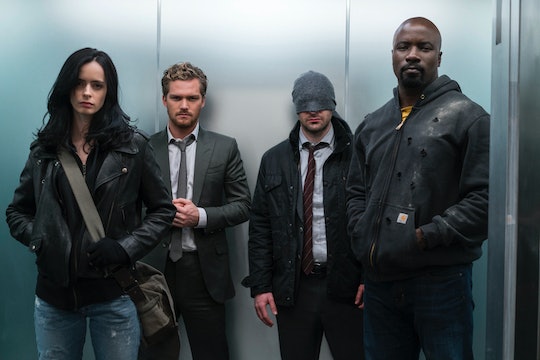 Where Does 'The Defenders' Fit In The Marvel Timeline?

The Marvel universe is expansive, stretching to epic proportions that include television and movies as well as the comics they originate from, and it can be difficult to puzzle out how it all fits together. It spans years and continents, with only a few threads connecting each facet of the wider world together. Some characters have appeared on several shows and there are major world events that have an impact too. Netflix's new collaborative series brings the Marvel TV family into closer contact than ever before, but where does The Defenders fit in the Marvel timeline?

The Netflix shows don't rely on the movies much, with only veiled references to the heroes that dominate the big screen. Instead, they operate on a much smaller scale that focuses on how things influence people living their day to day lives. That makes it more difficult to slot the Netflix shows into the wider Marvel universe, but figuring out the timeline of the Marvel TV shows themselves is actually fairly easy. They unfold chronologically, with each season and series set fairly soon after the one that came before it, though the window of time is much shorter than the release dates would indicate. To put it even more simply, the order in which you're watching everything is pretty much the order it's happening in.

The first season of Daredevil followed the alien invasion that occurred in the first Avengers movie, which had taken its toll on New York City and left the city in disrepair. Hell's Kitchen particularly suffered, which caused the rise of street level vigilantes like Matt Murdock. Though Jessica Jones didn't appear on Netflix until months later and Daredevil Season 2 took even more time, they both take place within six months or so of Daredevil's first season. A timeline created by Reddit user AgentKnitter speculated that all of that occurred after Captain America: Winter Soldier.

Luke Cage picks up not long after the events of Jessica Jones Season 1 and Daredevil Season 2, with Luke rebuilding his life after everything he went through with Jessica. Similarly, Iron Fist Season 1 took place after Luke Cage, and The Defenders continues the story from there. It's like one big series broken up with different titles just to keep you confused. Once again our friend AgentKnitter theorized that Luke Cage and Iron Fist take place in the gap of time between Avengers: Age of Ultron and Captain America: Civil War, though those worldwide issues get little play on the small screen.

The Defenders will catch up with each character right where audiences left off with them: Matt is still mourning the recent death of Elektra, Luke is still in prison, Jessica is hanging on by a thread, and Danny Rand is presumably dealing with fallout of the attacks by The Hand at K'un-Lun.

Everyone is where you left them, ready to take on whatever threat comes next.