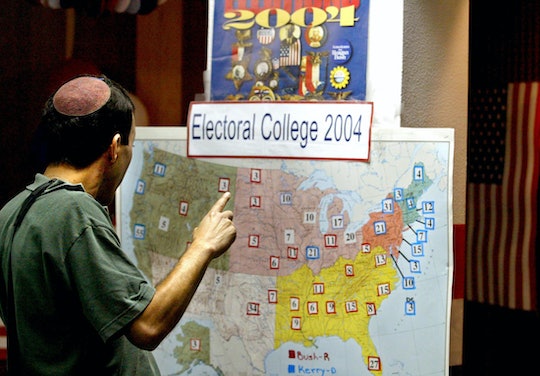 Where Does The Electoral College Vote Take Place? Electors Are Ready To Cast Their Votes

On Monday, Dec. 19, America's Electoral College will meet and decide who will become the next President of the United States. There's been more pressure and attention this year, after a campaign and popular election that left more questions than answers about the voting process and whether electors have an obligation to vote for the country's popular vote winner or the winner of the Electoral College. The world will be watching. So where does the Electoral College vote take place?

First, it's important to recognize this has been going on without much fanfare in every election. But this year's shocker election of Donald Trump over former Secretary of State Hillary Clinton in the Electoral College, but not the popular vote, has millions of Americans questioning why we have the electoral college in the first place. The reason? Slavery.

According to TIME, it was James Madison who objected to the election of a president by popular vote because the northern states would have greater numbers than the South, which did not allow its more than 500,000 slaves the right to vote. The electoral college was the compromise because it allowed southern states to count its slaves — two-fifths of them anyway — in presidential elections without actually giving them any say in the matter, TIME reported.

But, despite the Electoral College's racist intention to disenfranchise the black vote in America, the institution still stands and is on the verge of handing the presidency to Donald Trump, despite the fact that Clinton won the popular vote by 2.8 million, according to The Independent.

Election law expert Jerry J. Goldfeder sat down with Salon and talked about how the whole electoral vote process works:

In November everyone goes to the polls and votes not for President of the United States, but for electors pledged to a particular candidate. So people think they're voting for the actual candidate, but they're really not. All of the electors meet, this year on December 19th, they meet in their state capitols and those who have been elected — whether they've been pledged to Donald Trump or pledged to Hillary Clinton — they will vote. And that's the actual election day here in the United States.

So there you have it. Electors will meet in their individual state capitols to determine who will be the next leader of the free world. And although there have been calls from groups like the Hamilton Electors to ask the Electoral College to break with tradition and, instead of Trump, elect what they deem a "more qualified" Republican candidate to the White House, there is little indication there will be enough electors to change the expected outcome: the election of Donald Trump.

"The argument can always be made that, 'Well, Sec. Clinton won the popular election and therefore she should win the presidency.' This is the core argument of the direct popular election reform movement to eliminate the electoral college," Thomas H. Neale, an expert on the electoral college for the Congressional Research service, told Business Insider. "But that argument has been raised time and time again, and Congress hasn't acted on this proposal since 1979."

As of Monday, Trump's election will likely be official and electors will leave their state capitols and return to normal life for the next four years.