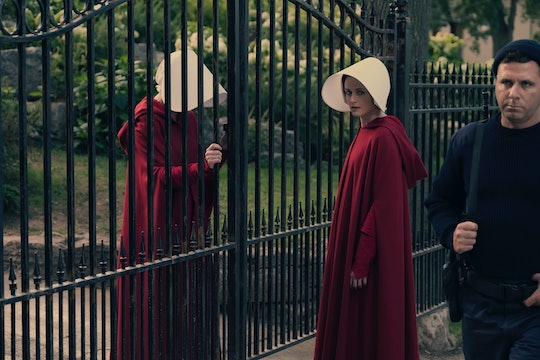 'The Handmaid's Tale' Setting Has A Biblical & Historical Basis

One of the most highly-anticipated shows of the year is Hulu's adaptation of The Handmaid's Tale, from the Margaret Atwood novel of the same name. Starring Elisabeth Moss as the protagonist, a Handmaid named Offred, the story depicts a futuristic society rooted in sexism and misogyny, where women have no rights and are classed in a hierarchal system largely based on whether or not they can reproduce. But where does The Handmaid's Tale take place? The book (and the new show) is set in the fictional world of the Republic of Gilead.

Gilead is a dystopian reality that supplanted what used to be the modern-day United States, installed by right-wing religious extremists after they faked a terrorist attack in order to seize control of the government. Women were quickly stripped of jobs, families, and identities, forced into various roles such as that of Handmaid (a fertile woman assigned to an elite-status Commander and his barren wife, in a world where fertility is sparse). All of this is revealed quickly within the show's official trailer. Obviously, it's all a fiction and not rooted in any kind of historical fact (for now, anyway), but aspects of the show and its terrifying society have their basis in reality.

For one, the novel (and probably also the show) are set in Cambridge, Massachusetts, something that Atwood herself has confirmed. She chose to set her story there because of New England's puritanical history. ''You often hear in North America, 'It can't happen here,' but it happened quite early on. The Puritans banished people who didn't agree with them, so we would be rather smug to assume that the seeds are not there. That's why I set the book in Cambridge,'' Atwood told The New York Times. The long, formless red robes and bonnets of the Handmaids definitely call to mind chaste, religious Puritan dress.

On the show, the group who seized control of the government is uber-religious, using the Old Testament as a guideline for classing their women. Democracy is supplanted and in its place a militaristic and theocratic government rises, taking control of women's bodies in order to insure that the human race continues to repopulate. The religious connotations are also made manifest in the choice of their new society's name itself — Gilead is a biblical reference. It indicates several different places, including the general "hill of testimony" and a mountainous region east of Jordan.

But most important is the resulting biblical reference, the "balm of Gilead." The Merriam-Webster dictionary defines the "balm of Gilead" as "an agency that soothes, relieves, or heals." Clearly, this reference would have at least partially inspired Atwood's choice in naming her dystopian future society — the people who installed it obviously think that they're a "balm" for mankind. And, more specifically, for the America that they took over.