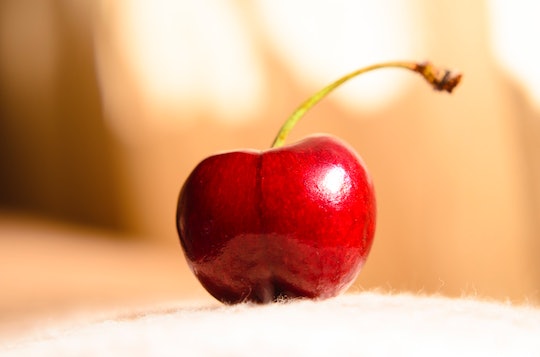 The Term "Pop Your Cherry" Has An Interesting History

In short, according to Teen Vogue, the cherry refers to a woman's hymen, which is a small membrane just inside the opening to the vagina. When the cherry is popped — or the hymen is broken — it means the woman is no longer a virgin. The hymen, however, is a much more complicated subject than the simple "popping your cherry" phrase would imply. For one, according to Jezebel, not all women bleed when they pop their cherries. Some people bleed, some don't, and some may bleed a lot.

Complicating the matter even more, your hymen never technically "pops", as the phrase implies, according to Medical Daily. When a woman is born, her hymen is thick and contains a small opening to allow for menstrual blood to flow when the time comes. The hymen membrane thins out and stretches over the years, however, and can be worn away or torn due to strenuous exercise, tampon use, and masturbation. By the time a woman is ready to have sex, the hymenal tissue's elasticity has widened the whole enough to allow for when the penis enters. So it's not that your hymen breaks or pops, but that it has simply stretched out or torn.

Not only is the phrase "popping your cherry" technically inaccurate, but it has a shaky and uncertain history to boot. According to New Health Advisor, nobody is entire sure where the phrase "pop your cherry" actually comes from. The first references to "cherry" are found in the 16th century when the word may have referred to the dark pubic hair of a woman. The more modern version of the phrase became popular in the 19th century, however, when a woman was considered "ripe for plucking" if she was a virgin (and her "cherry" was intact).

So if the hymen doesn't "pop," where does all that blood come from? According to GURL, one of the things that you need to know about your hymen and virginity is that the blood from having first-time sex likely comes from not relaxing your vagina muscles and going too rough. Really, the tired old "popping your cherry" phrase should probably be retired by now since it is not really physiologically accurate anyway. But hey, at least now you know, right?