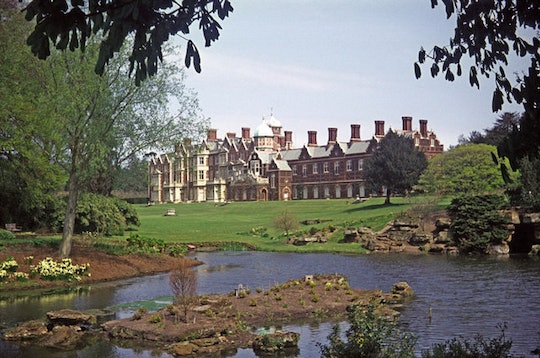 Here's Where The Royal Family Celebrates Christmas (Hint: It's Beautiful)

Christmas, for many people, is a time to eat and spend like royalty, and you might be wondering, where does the actual royal family spend Christmas? Do they have a potluck at Buckingham palace, or take a ski vacation in the Alps? It turns out that their holiday traditions are probably a lot like yours, except for the whole palace setting... And the servants... And the dress code. But basically, just like your average family. OK, maybe not so much. Meghan Markle, I hope you're paying attention, because this is what you're getting yourself into for the next, oh, 60 or 70 years.

A delightfully British account from Hello! magazine explains the very formal-sounding festivities as though they're completely normal, which, I guess they are, for the Windsors. The family spends their holiday at the the Queen's "country home," Sandringham Estate, which you may notice from the photo above is actually a castle. Her spare castle. Imagine the heating bills. Queen Elizabeth and Prince Philip arrive a few days in advance to "prepare," although I can't really picture her baking cookies while he wrestles to untangle hundreds of feet of Christmas lights, but it's super fun to try it. Go ahead, I'll wait. Make sure to put her in a "Kingdom's Best Grandma" apron.

Right, so they're probably not doing that, because they've got the servants and whatnot. Still, it's a big family reunion, with guests arriving in order of importance (can you imagine?). Prince William and Kate, the magazine reports, generally stay at their little castle down the lane, Anmer Hall, and Prince Harry and his new fianceé are expected to bunk with them on a futon or a pull-out couch, I suppose. On Christmas Eve, once everyone's arrived, the gifts are laid out very precisely on a white linen-covered table in the Red Drawing Room, and the family opens them at tea time before retiring to the Saloon for scones and sandwiches, which, I'm sorry, doesn't hold a candle to my deviled eggs and cheese platter. Your loss, royals!

You might also be wondering what kind of presents are exchanged between people who literally own crown jewels already. Charmingly, the royal family has a tradition of giving each other gag gifts, although they're probably still a little pricier than that fart keychain you picked up for your cousin at Spencer's. Biographer Brian Hoey told ABC News that Prince Charles' sister once gave him a white leather toilet seat that he found "so marvelous, so comfortable, it now accompanies him everywhere he goes — all around the world."

After tea and gag gifts, it's time to dress for dinner in black tie, gowns, and jewels. A candlelight dinner is served on fine china at 8:00 p.m. Around 10, the women and corgis are given the boot so that the men may enjoy their port and brandy in peace. This is likely when Kate and Meghan will retire to Anmer Hall for makeovers and a pillow fight. I kid, but whatever they're planning on doing, I bet it's more fun that drinking port and brandy, just saying.

Christmas day begins with stockings and a full English breakfast, followed by services at St. Mary's Magdalene church, a tradition that's been kept since the days of the Queen's Great-Great Grandmother Queen Victoria, according to the royal family's official website. Victoria is also credited with popularizing the Christmas tree during her reign. After church, it's back to Sandringham House for turkey dinner at 1:00 p.m., after which the Queen makes her annual televised speech. For the final holiday meal, the staff is off the hook, as the family chooses to serves themselves a buffet supper. Royals, they're just like us!