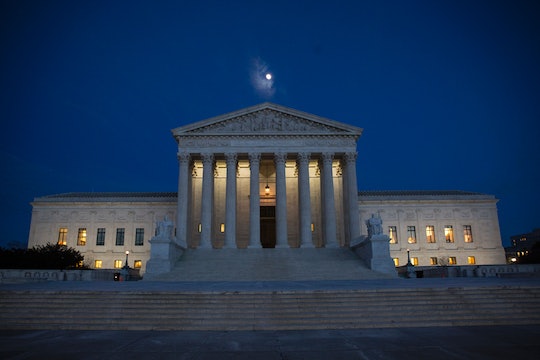 Where Does The Women's March On Washington End?

On Jan. 21, thousands of organizers are set to gather at Independence Avenue and Third Street SW, near the U.S. Capitol in Washington D.C. for the start of the Women's March on Washington. It starts at 10 a.m., and organizers say anyone, regardless of gender or gender identity, who believes women’s rights are human rights, are welcome to join the march. So we know where it begins, but those who plan to attend the event are still asking — where does the Women's March on Washington end?

The Women's March on Washington is scheduled for the day after the presidential inauguration, so it's set to take place in a little over a week. By now, many who plan to travel to and attend the march have made plans for how they're getting there. But there is still little information to be found about what route the march is taking, and where exactly it will conclude, likely several hours later.

According to the official Women's March on Washington website FAQ page, the current word on the end point for the march is still unclear. It only states, "stay tuned to our website for more information about the route as we get closer to the march."

According to Cassady Fendlay, a spokeswoman for the organizers of the march who spoke with the New York Times, "participants will hold several events for an hour or two before the march begins." But the final route has not been determined, and the event could last until 5 p.m.

With no spot for the end of the march being offered currently, making plans regarding what public transportation to take or how to meet up with other participants after the conclusion of the march is more difficult to do. A recent tweet from the Women's March on Washington stated, "Support the Women's March on Washington today. We'll see you 1.21 in D.C.", and again listed the location of the start of the march, but no further information on where it ends.

In addition, several social media pages for the March just released a video that states it will "tell you all you need to know ahead of the Women's March on Washington." The video reveals that the plan is to march for about 1.5 miles, and that there will be openings along the route in case you want to exit early, but the video still does not state a route or finishing line for the procession.

An amazing number of organizations have asked to partner with the event, bringing delegations from many different groups hailing from many different places. According to an article on Heavy.com, organizations that have signed on as partners include 1199 SEIU, American Association of University Women (AAUW), EMILY’s List, Girls Who Code, the National Organization for Women (NOW), the Sierra Club, several churches and religious groups, and many more. With so many participants and so many organizations planning to attend, many who hope to be there are waiting not-so-patiently for updates on the route that day.

Romper has reached out to a National Co-Chair and member of the National Committee for the Women's March on Washington for comment on the official route.

More Like This
Meghan Markle Spent Her Thanksgiving Volunteering For A Cause Close To Her Heart
How To Watch Elf In 2022, Including A 24-Hour Marathon
Aww! 2-Year-Old Archie Is "Very Happy" To Be A Big Brother
'Harry & Meghan' Shares Never-Before-Seen Photos Of Archie & Lilibet