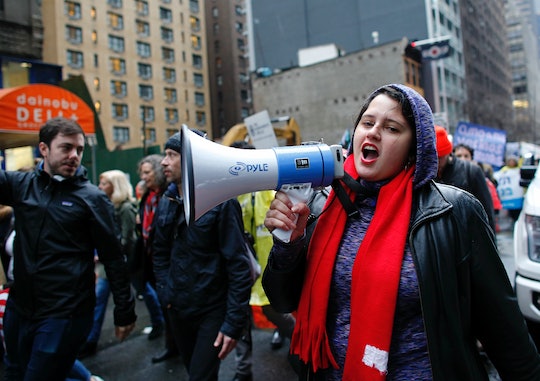 Find Out Where The Women's March Starts

For too many women, seeing the election of Donald Trump as 45th president of the United States was a painful, bitter, and traumatizing experience. The man who bragged about allegedly sexually assaulting women was now set to be the leader of the free world, and many were shocked. But with Hillary Clinton's defeat sprang a new movement. As one Facebook user posted about the possibility of women protesting Trump's Inauguration, the movement, now formally known as The Women's March on Washington, has amassed over 200,000 claimed participants and is revving itself up to be the largest inaugural protest in history. With an event this large, logistical issues like parking and routes tend to get left in the mud amid all the fervor. So where exactly will the Women's March start and when?

According to the Women's March's website, the march will begin at 11:00 a.m. ET on Saturday, Jan 21, a day after Donald Trump's swearing-in ceremony. The group will meet at "the intersection of Independence Avenue and Third Street SW, near the U.S. Capitol," the website notes, and will proceed to march down the National Mall to protest Donald Trump's first full day in office.

While any support for the movement is appreciated — and, in fact, many state capitals around the country are becoming home to a wide array of women's marches in solidarity with the one in D.C. — actually attending the event in person is sure to be a once-in-a-lifetime experience, as it will likely make history, in some way or another.

While the name may imply otherwise, the march itself claims to be open to anyone, with the website specifically stating that "the Women’s March on Washington (WMW) is for any person, regardless of gender or gender identity, who believes women’s rights are human rights." In fact, there has even been an emergence of men's groups supporting the Women's March, one called the Men of Women's March, whose goal is to "stand in solidarity with the women in our lives who are attending the Women's March ... in Washington D.C. and beyond."

There are other groups as well. Veterans Stand, the group that worked to support the protests at Standing Rock in North Dakota last year, will be in D.C. on Jan. 21 to support fellow veteran Tee Marie Hanible, an "activist, nonprofit founder, and co-star on the FOX show American Grit," according to Hanible's recent Medium post.

In other words, no matter your gender, sexual orientation, race, ethnicity, religion, or anything else, as long as you believe in the fundamental values of equal rights, you're welcome at the Women's March, or any of the smaller protests happening across the nation.

The Women's March is a historic event, and one that you should be fully prepared for if you intend on going — it's truly a place for complete inclusion and support for those who may be negatively affected by Donald Trump's presidency. Whether you attend the event in D.C., at your own state's capitol, or just follow along on Twitter, your support is appreciated and important.